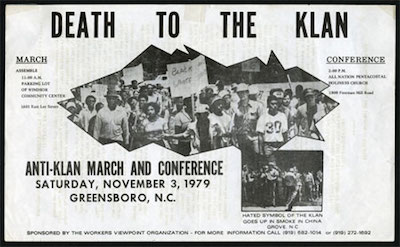 On November 3, 1979, in Greensboro, North Carolina, a “Death to the Klan” rally and march organized by the Communist Workers Party which was previously known as the Workers Viewpoint Organization (WVO), was planned to occur in Morningside Home, a predominantly black housing project.

During the rally, a caravan of cars and trucks with members of the Ku Klux Klan (KKK) and American Nazi Party (ANP) drove through the Morningside Home project, firing into the crowd of protesters with shotguns, rifles, and pistols.  After 88 seconds of gunfire, and the gun smoke cleared, five members of the Communist Workers Party lay dead: Sandra (Neely) Smith, a graduate of Bennett College, union organizer and founding member of the Student Organization for Black Unity (SOBU); Dr. James Waller, president of a local textile workers union who ceased medical practice to organize workers; Bill Sampson, a graduate of the Harvard Divinity School; Cesar Cauce, a Cuban immigrant who recently graduated magna cum laude from Duke University; and Dr. Michael Nathan, chief of pediatrics at Lincoln Community Health Center in Durham, North Carolina, a clinic committed to helping children from low-income families. Ten other protesters were wounded including Nelson Johnson, Paul Bermanzohn, Dr. Martha Nathan, and Jim Wrenn.

The shooting was retaliation against anti-racist protesters associated with Workers Viewpoint Organization who disrupted a screening of The Birth of a Nation in China Grove, North Carolina in July 1979. Two days prior to the proposed march in Greensboro, a police informant who was also a member of the KKK obtained a map of the march route with the intention of violently confronting the demonstration.

In the aftermath of the “Greensboro Massacre,” with video footage of the deadly shooting taken by television news cameramen, two criminal trials were conducted: six men were prosecuted in a state criminal trial in 1980, five were charged with murder. All were acquitted by an all-white jury. A second, federal criminal civil rights trial in 1984 concluded with the acquittal of the nine defendants by an all-white jury. In 1985, a civil jury found the city, the Ku Klux Klan, and the Nazis liable for violating the civil rights of one demonstrator; the city paid the widow of Dr. Michael Nathan approximately $351,000 on behalf of all parties.

In 2004, citizens of Greensboro organized a Greensboro Truth and Reconciliation Commission, modeled after the post-apartheid commissions in South Africa. The intention was to investigate and hear testimony concerning the events of 1979. The commission lacked subpoena power, the ability to compel testimony, and the ability to invoke the punishment of perjury for false testimony. Nonetheless, it issued a Final Report in 2006 concluding that the WVO, the Klan, and the Greensboro Police Department contributed in varying degrees to the tragic event. In 2009, the Greensboro City Council passed a resolution expressing regret for the murders and in 2015 the city of Greensboro, amidst controversy, unveiled a historical marker to acknowledge the Greensboro Massacre.