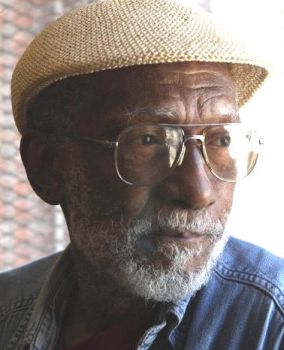 The poet, novelist, and screenwriter Sam Greenlee was born in Chicago, Illinois on July 13, 1930 after his family recently migrated from the South to the city.  Greenlee attended inner city schools in Chicago and became politically active at a very young age.  He participated in his first sit-in protest at the age of 15 and walked a picket line later that year.

Greenlee left Chicago to attend the University of Wisconsin in 1948, where he completed a Bachelor’s degree in Political Science in 1952.  After graduation, Greenlee joined the United States Army and served for two years, achieving the rank of first lieutenant before the end of his service.

After his time in the army he continued his education at the University of Chicago, studying international relations from 1954 to 1957.  He did not complete the program or receive a degree.  Instead, in 1957, he became one of the first black officers in the United States Information Agency (USIA), a position that would take him around the world until he left the agency in 1965.  During his time with USIA, Greenlee served in Iraq, Pakistan, Indonesia, and Greece.  He received the Meritorious Service Award for bravery during the 1958 Kassem Revolution in Iraq, an event which inspired his 1991 book, Bagdad Blues.

Upon leaving the USIA, Greenlee studied briefly at the University of Thessaloniki in Greece, and spent some time living on the Greek Island of Mykonos.  It was during this time that Greenlee composed his famous and highly-controversial novel, The Spook Who Stood by the Door (1969).  His novel was the tale of a black former CIA operative who leaves the agency to secretly create a small army of Black Nationalist freedom fighters in the United States.

Due to its controversial nature, the book was turned down by more than 40 American publishers before it was finally accepted by the British publisher, Allison and Busby, of London, UK.  Greenlee co-wrote the screenplay for the 1973 film release of The Spook Who Stood by the Door, and the film became instantly popular during the short time it was shown.  It was pulled abruptly from distribution for unknown reasons, possibly due to opposition from the U.S. government.  The film was re-released in 2004.

Sam Greenlee continued to be politically active, speaking against social injustice and the imperialistic practices of the United States government both in interviews and as a radio talk show host until his death.  His other published works included Blues for an African Princess (1971), and Ammunition! Poetry and Other Raps (1975).