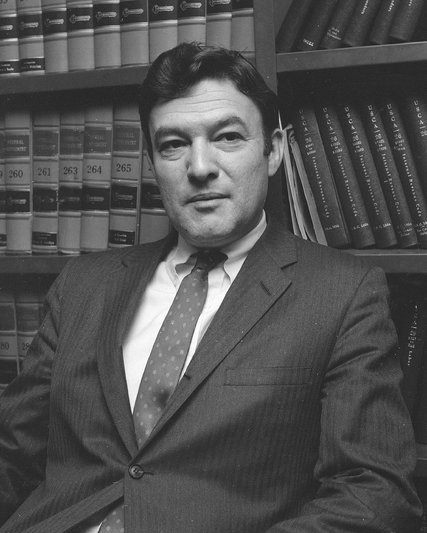 Jack Greenberg was a prominent civil rights lawyer, directing the NAACP Legal Defense Fund (LDF) for 23 years and arguing crucial cases at the U.S. Supreme Court. He was born in New York City, New York on December 22, 1924 to Jewish immigrant parents Max and Bertha Greenberg. During World War II, he served in the U.S. Navy and participated in the battles of Iwo Jima and Okinawa. While serving, he was distressed by the racial inequality that he saw in Navy ranks. In 1945, he graduated from Columbia University.

After the war, Greenberg earned his law degree from Columbia. In 1949, when Greenberg was just 24, Thurgood Marshall hired him to the NAACP LDF. Three years later, he helped argue the landmark case Brown v. Board of Education, which declared school segregation unconstitutional, before the Supreme Court.

When Thurgood Marshall became a federal judge in 1961, he appointed Greenberg to fill his position as LDF chair, a post he held until 1984. Under Greenberg’s leadership, the LDF grew greatly in size to 25 staff attorneys and he tripled its budget.

Throughout his career, Greenberg participated in over 40 civil rights cases brought to the U.S. Supreme Court. These included Meredith v. Fair in 1961, which integrated the University of Mississippi; Alexander v. Holmes County Board of Education in 1969, which helped speed school integration; and Griggs v. Duke Power Company in 1971, which created protections against racial discrimination in hiring practices. Greenberg also was involved in other important efforts, such as the planning of the second Selma to Montgomery march in 1965, which helped advance the voting rights bill then stalled in the U.S. Congress.  That bill eventually became the Voting Rights Act of 1965.

In addition, he staunchly opposed capital punishment, in large part due to racial bias in sentencing. Greenberg was involved in the 1972 case Furman v. Georgia, which resulted in a national moratorium on the death penalty.

Unfortunately, Greenberg became entangled in racial controversies during his career. Some opposed his 1961 appointment by Thurgood Marshall to head the LDF, believing that the position should be filled by an African American attorney. Roy Wilkins, then executive director of the NAACP leader, accused Greenberg of trying to downplay the role of black lawyers in the landmark 1954 Brown v. Board of Education decision. Greenberg called the accusation “an unfortunate mischaracterization.” Through these difficulties, however, many black civil rights leaders, including Bayard Rustin, stood by Greenberg and his efforts against racism in the United States. Greenberg also made history when he became a member of the predominately African American Alpha Phi Alpha and Sigma Pi Phi fraternities.

After his tenure at the LDF, Greenberg became a law professor at Columbia, his alma mater. In 1989, he was appointed dean of Columbia College, a division of Columbia University.  Although he stepped down from this position in 1993, he continued teaching at Columbia until 2015. At Columbia, he continued his advocacy against segregation in the United States and Europe, where he became involved in helping integrate Roma (Gypsy) people.

Greenberg divorced his first wife, Sema Ann Tanzer, with whom he had four children, in 1970. He married Deborah Cole that same year and remained married to her until his death. Jack Greenberg passed away in New York City on October 12, 2016 at the age of 91.