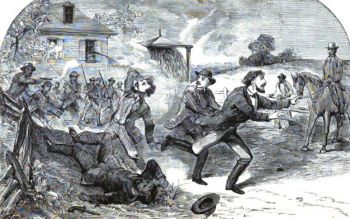 Artist Rendering of the Christiana Incident, 1851

Henry Davis Green was an anti-slavery activist (abolitionist) who was a participant in the Christiana Resistance (also known as the Christiana Riot) of 1851, the largest and most violent antebellum response to the Fugitive Slave Act of 1850. Green, a teamster by occupation, was born in Salisbury Township, Lancaster County, Pennsylvania, in 1827.  He was the son of Benjamin, a mulatto man, and Sarah Green, a white woman.

Green took part in the Christiana Resistance which occurred nearly a year after the passage of the Fugitive Slave Act on September 18, 1850.  With that act, federal marshals were given the authority to track down fugitive slaves and to arrest those who harbored or defended them.  Green in turn joined other free blacks in southeastern Pennsylvania in creating the quasi-secret Organization for Mutual Protection, whose members vowed to prevent the capture and reenslavement of runaways as well as to protect those who operated the Underground Railroad in their area.  They pledged that protection even at the risk of their own lives, after listening to speeches by Frederick Douglass and William Lloyd Garrison who lectured in nearby Lancaster.

Their resolve was tested on September 11, 1851, when Edward Gorsuch, a Maryland slaveholder, and deputy U.S. marshal Henry H. Kline led a six man Maryland posse which descended on William Parker’s house, in Christiana, Pennsylvania.  Parker, himself a former slave, maintained his place as a “safe house,” a stop along the Underground Railroad.  Gorsuch demanded that Parker turn over his “property” meaning runaway slaves from his plantation.  Parker told him that he had no “property” and commanded he leave his door.  As the men argued, a shot rang out, hitting Gorsuch in the chest, killing him almost immediately.  When the posse looked around, they found themselves surrounded by armed members of the Organization for Mutual Protection as well as local white abolitionists.  The posse quickly fled the scene.

The following day United States Marines, federal marshals, and vigilantes descended on Christiana, Pennsylvania, arresting 141 people including four white men and 35 black men who were charged with treason, the largest number ever accused of that crime at one time.  Green was one of those charged.  By that time, William Parker was well on his way to Canada, along the Underground Railroad.

The men were taken to Philadelphia and housed in the city’s Moyamensing Prison while awaiting trial. That trial lasted for three weeks in October at the Federal Courthouse in Philadelphia. Federal prosecutors argued for a conviction of all of the defendants but Pennsylvania Congressman Thaddeus Stephens, serving as the defendant’s attorney, managed to get acquittals or dismissed charges for all of the accused. In tribute to those who resisted slavery, the citizens of Christina, Pennsylvania named a number of streets after the leading participants with each street leading to the now famous Parker House.

Green later joined the Union Army after the outbreak of the Civil War.  He served as a private in the 41st United States Colored Troops (USCT), Company B, which was organized in Lancaster County, Pennsylvania.

Green married twice, first in 1860 to Susan Green, and again in 1899 to Caroline Harris. After the Civil War, Green returned to Christiana.  He passed away in 1911, at the age of 84, surrounded by his wife and children.