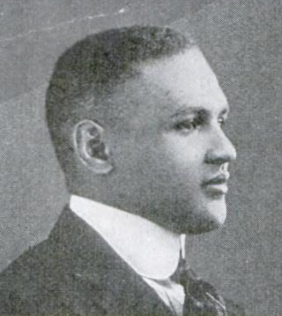 Walter Arthur Gordon, attorney and civil rights activist, was born on October 10, 1894, in Atlanta, Georgia, to Henry B. and Georgia Bryant Gordon.  He was the son of a Pullman porter and the grandson of slaves. His family moved to Riverside, California, in 1904. He graduated from Riverside Polytechnic High School in 1913.

In 1914, Gordon entered the University of California at Berkeley. He was an intercollegiate boxer and wrestler, winning the state championship in both categories. He also played every position except center on the offensive and defensive lines of the varsity football team. Gordon was named to the annual football All-American team in 1918, the second African American to receive the award.

Walter Gordon graduated from UC Berkeley in 1918. The following year, Chief August Vollmer invited him to join the Berkeley Police Department, where he became the city’s first black officer. While doing police work, Gordon earned a degree in 1922 from Boalt Hall School of Law at UC Berkeley, the first African American to receive a law degree from the state school. He passed the California Bar and started a law practice in Oakland, California. He also worked as an assistant coach and scout for the UC Berkeley football team in the 1920s.

Gordon belonged to notable civic organizations. He was a member of the Commonwealth Club of California, served as vice-president of the Lawyer’s Guild of San Francisco, and headed the Alameda County chapter of the National Association for the Advancement of Colored People (NAACP).

Gordon retired from the Berkeley Police Department in 1930. He continued his law practice and often defended clients against county prosecution in Alameda County in the 1930s. Alameda County District Attorney Earl Warren, who had a friendly relationship with Gordon, frequently opposed him. Despite being on opposite sides of the judicial fence, Gordon and Warren became closer friends.

On June 3, 1943, mobs of white sailors, soldiers, and civilians in downtown Los Angeles attacked young Latinos wearing zoot-suits and tore off their clothes. The rioting continued for six days until the Navy declared the city off-limits to servicemen. Earl Warren, now Governor of California, sent a team, headed by Gordon, to investigate and evaluate the conflict. They recommended punishment for all military and civilians responsible for the riots and called for better-trained police to work with Latino youth.

Governor Warren appointed Gordon to the California Adult Authority, the state’s parole board, in 1944. He became chairman in 1946 and directed the board for nine years.

In 1955, President Dwight Eisenhower named Gordon Governor of the United States Virgin Islands. Three years later, he resigned and was appointed Federal Judge of the District Court of the Virgin Islands. He served for ten years.

Walter Arthur Gordon died in Berkeley, California, on April 2, 1976, at the age of 81. He was survived by his wife, Elizabeth, a daughter, and two sons.