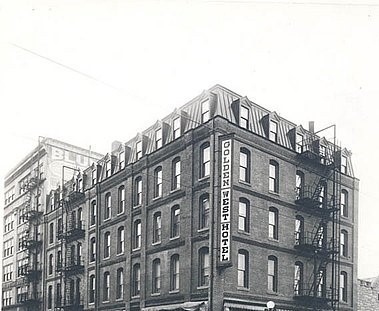 The Golden West Hotel was the first hotel in Portland, Oregon, to serve black patrons. William D. Allen, an entrepreneur from Tennessee and prominent member of the local black community, founded the hotel in 1906 to serve African-American railroad workers who were denied accommodations elsewhere in the city. It operated for twenty-five years before the Great Depression caused its closure in 1931.

At the turn of the twentieth century, most black Portland residents lived in Northwest Portland, west of the Willamette River. It was in this area, at the corner of Broadway and Everett, that Allen launched the Golden West Hotel. Numerous other businesses catering to black customers lined nearby streets, and the Mt. Olivet Baptist Church stood next door.

Besides serving as a business hub, the hotel became a social center for the black community. After Sunday morning services, many black churchgoers visited the Golden West. Prominent black entertainers, politicians, and musicians visited the hotel, including Freddie Keppard’s Original Creole Orchestra and civil rights activist A. Philip Randolph. A gambling den, largely shrouded in mystery to this day, operated in the hotel’s basement.

As Portland and its black community grew, the African-American population began shifting to the east side of the Willamette River. In 1921 the Mt. Olivet Baptist Church, neighbor to the Golden West, moved to northeast Portland. Many black railroad workers lost their jobs in the Great Depression, further impacting the hotel’s business. Allen closed the hotel in 1931; over the next decade, the building changed hands several times. Catherine Byrd operated the New Golden West Hotel in the same building, which also catered to African-American guests, from 1933 to 1935.

In 1943 the building became the Broadmoor Hotel, a low-cost housing development. Today, it still houses low-income housing operated by local nonprofit Central City Concern but is again called the Golden West. In 2009 a permanent exhibit about the Golden West Hotel’s history was installed on the outside of the building.