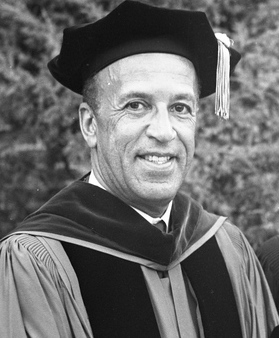 Born on May 11, 1911 in Brownsville, Tennessee, Dr. Hugh Gloster was best known as the  longtime president of Morehouse College in Atlanta, Georgia and a literary critic. Gloster was was the youngest child of John and Dora Gloster. He was the product of a long tradition of striving for educational excellence that led to the presidency of Morehouse College and other noted educational accomplishments.

Gloster was born in Brownsville, Tennessee, where his parents came to teach in 1886 after graduating from Roger Williams University in Nashville. His parents emphasized spiritual devotion, education, accomplishment and the social responsibility of demanding full citizenship rights.

Gloster’s early education began at Brownsville and was continued in Memphis at Howe Institute and Lemoyne College, when his family left Brownsville in 1915 amidst local racial turmoil. Gloster earned an undergraduate degree from Morehouse College in 1931 and pursued graduate study at Atlanta University and New York University culminating in the doctorate degree in 1943.

Dr. Gloster, a member of Sigma Pi Phi and Alpha Phi Alpha Fraternities, was a founding member of the College Language Association (CLA) in 1937. His long and illustrious career in higher education began at LeMoyne College in Memphis, Tennessee where he taught from 1933 to 1941 and continued at Hampton Institute (1946–1967). In 1967 he began his twenty year tenure as president of Morehouse College. Negro Voices in American Fiction, his pioneering work in black literary criticism, was published in 1948. Following retirement from Morehouse, Gloster served as a consultant to the Southern Association for the Accreditation of Schools and Colleges.