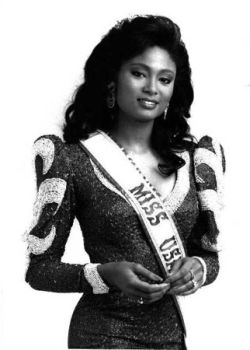 Carole Anne-Marie Gist, the first African American woman to win the Miss USA title, was born on May 8, 1969 in Detroit, Michigan.  Gist, the daughter of Joan Gist and David Turner, is of African American and Cherokee heritage.  Her parents divorced when she was a young child.  Gist graduated from Cass Technical High School in Detroit in 1987 where she had been an honor student.

Gist first won the tile of Miss Michigan USA in 1989 and went on to win the title of Miss USA on March 2, 1990 in Wichita, Kansas.  She was the first contestant from Michigan to win the Miss USA (not Miss America) title and she also broke the five year streak of winners from the state of Texas. At 5’11” Gist was also the tallest Miss USA. At the time of her crowning, she was a junior majoring in marketing and management at Northwood University in Midland, Michigan, from which she eventually received her B.A. degree.

Winning the title brought Gist over $200,000 in cash and prizes and automatically earned her the opportunity to represent the United States in the Miss Universe pageant where she placed as first runner up to Miss Norway, Mona Grut.

Throughout her reign as Miss USA, Gist captivated audiences with her stories of being from a single parent home where she had a number of siblings and having to overcome numerous financial and social obstacles. She described the family’s frequent moves in some of the roughest neighborhoods in inner city Detroit and of her homes being frequently burglarized. Gist claimed that money was always scarce in her family and that poverty prevented her from taking dance lessons or learning the piano and violin. Her story contrasted sharply with the middle class backgrounds of most of her competition and of previous Miss USA crown holders.

Controversy, however, surrounded Gist’s reign as Miss USA.  Her conflicts with pageant officials became well known to the public by 1991. Toward the end of her reign she filed a $20,000,000 lawsuit against the Miss USA Organization for fraud.  The lawsuit was eventually dismissed.

Following her reign, Gist co-hosted a program on the WORD gospel network. Carol Ann-Marie Gist is currently married with two children.  She works for a Detroit area construction company and is a fitness trainer at Wayne State University.