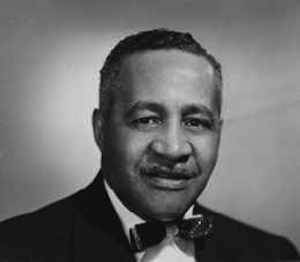 Russell S. Gideon was a Seattle, Washington businessman, pharmacist, and pioneer in the development of senior housing.  From 1977 until his death in 1985, he was recognized yearly by Ebony magazine as one the nation’s 100 most influential black citizens.  He was a respected community leader, and a man of great energy and charm.  Gideon used these personal attributes to advantage in pursuing many humanitarian and business interests.

Born October 9, 1904, in Liverpool, Nova Scotia, Canada, Russell Gideon moved with his family to Calgary, Alberta, as a nine year old.  He was an All Star Athlete in hockey, baseball, track, and football.  As a 15 year old he worked after school as a drugstore delivery boy.  That experience persuaded him to become a pharmacist.  In 1932 at age 28, Gideon left Calgary and came to the United States to study at Boston’s Patrick School of Pharmacy, an all-black pharmacy school.   After his training at Patrick’s School of Pharmacy, and soon after Massachusetts’s white pharmacy schools began admitting blacks, Gideon enrolled in the Western Massachusetts School of Pharmacy in 1937 and graduated from that institution in 1941.  He met his future wife, Lillian Morris, in Boston, Massachusetts.  They were married in Boston in 1934.

During World War II Gideon, now a U.S. citizen, served in the United States Army in North Africa and Italy as a technical sergeant in the 366th Infantry Medical Corps.  He and his wife Lillian moved to Seattle in 1946.  He bought a drug store at 22nd Avenue East and East Madison Street, Seattle which he operated until 1963.

Russell Gideon served on numerous boards, among them the Florence Crittenden Home for Unwed Teenage Mothers, the Seattle Urban League, the Foundation for International Understanding created by students at the University of Washington, and the East Madison YMCA.

In 1963, Governor Albert Rossellini appointed Gideon to the Washington State Board of Prison Terms and Paroles.  He was a charter member of the Central Area Kiwanis Club and a trustee at Mt. Zion Baptist Church in Seattle.

National honor came to Russell Gideon in 1977 when he was elected Sovereign Grand Commander of the United Supreme Council Ancient and Accepted Scottish Rite of Freemasonry, Prince Hall Affiliation, Northern Jurisdiction.  In that post, he led the 22,000 Prince Hall Masons north of the Mason-Dixon Line.  His appointment marked the first time in 84 years that a Mason west of Mississippi had been elected to hold this post.  A bust was commissioned in 1984 honoring his time in office and was placed in the Masonic Cathedral’s Hall of Fame in Philadelphia, Pennsylvania.

Russell S. Gideon, a founder of Alpha Omicron Boule of Sigma Pi Phi fraternity, died on September 29, 1985, ten days before his 82nd birthday.  He left behind his wife of 51 years, Lillian, and one son, Melvin Dodd.  On September 13, 1986, a housing complex for low income seniors and disabled residents was named the Gideon-Mathews Gardens in his honor.