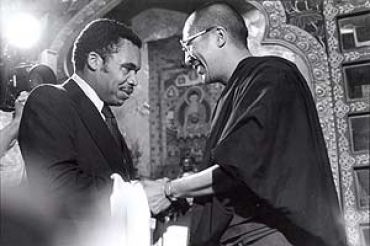 Kenneth Allen Gibson, the first African American mayor of Newark, New Jersey, was born in 1931 in the town of Enterprise, Alabama.  He graduated from high school in Enterprise in 1950 and joined the U.S. Army as a civil engineer.  He remained in the Army until 1958. After his discharge, he took a job as a New Jersey State Highway Patrol trooper while simultaneously attending Newark College. Gibson graduated with a B.S. in Civil Engineering in 1963.

After college Gibson took an engineering position for the Newark Housing Authority where he oversaw urban renewal projects from 1960-1966. In 1966, he became Newark’s chief structural engineer. He was also the head of Newark’s Business and Industry Coordinating Council and served as vice president of the United Community Corporation, which fought poverty in Newark during that time.

In 1970 Gibson ran for Mayor of Newark, New Jersey and defeated incumbent Hugh J. Addonizio, who was subsequently convicted of extortion and conspiracy charges. Gibson took over a predominantly African American city, still recovering from the race riot of 1967 which left 23 people dead. He was credited for economic revival that resuscitated the city’s economy. When he first came into office, the city was in the midst of a population loss from 400,000 to 300,000.  By the end of his first term, the numbers slowly began to grow again as Gibson encouraged the return of middle class residents with urban housing developments such as Society Hill.  His administration was also initially identified with black nationalist poet and playwright Amiri Baraka whom many credited with Gibson’s first election to the mayor’s post.

Kenneth Gibson served four consecutive terms in office until 1986 when he was defeated for reelection by Sharpe James following a scandal which resulted in his indictment on conspiracy and misconduct charges.  Gibson was acquitted in his subsequent trial that took place after he left office.

Gibson was actively involved in a number of civil rights organizations such as the National Urban League, the National Association for the Advancement of Colored People (NAACP), and the Congress of Racial Equality (CORE).  In 1976 Gibson also became the first African American to serve as President of the U.S. Conference of Mayors.