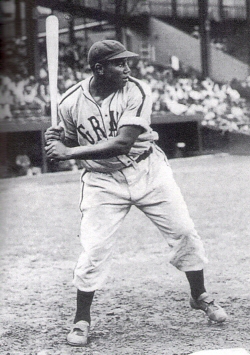 Josh Gibson was born in Buena Vista, Georgia, on December 21, 1911. He moved to Pittsburgh in 1924 when his father found work in a steel mill.  He played baseball for company teams in the area but began his career with the Negro League when he signed w 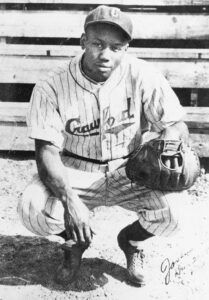 ith the Pittsburgh Crawfords. He played for the Crawfords from 1927 to 1929 and from 1932 to 1936.  In an era of segregation, Josh Gibson was known as the “Black Babe Ruth.”  Josh gained legendary status during his lifetime by regularly hitting baseballs 500 feet or more.  He is credited with hitting almost 800 homeruns

in his 17 year baseball career with a lifetime batting average of at least .350.  No one else in the Negro Baseball League had a higher batting average and slugging percentage.

After six years with the Crawfords, he joined the Homestead Grays in 1937 where he teamed up with future Hall of Fame members Oscar Charlston, Cool Papa Bell, Judy Johnson and Satchel Paige.  The Homestead Grays, with Gibson as their catcher, won nine consecutive Negro National League pennants.  Josh was the homerun leader in the Negro National League for the ten years that he played for the Homestead Grays.  There were rumors that Gibson signed with the Pittsburgh Pirates in 1943, but Major League Commissioner Landis would not allow Josh to play.  Just months before Jackie Robinson signed with the Brooklyn Dodgers, Josh Gibson died of a stroke on January 20, 1947 at age 35, never having played in the Big Leagues. In 1972, he was the second member of the Negro Baseball League elected to the Baseball Hall of Fame.