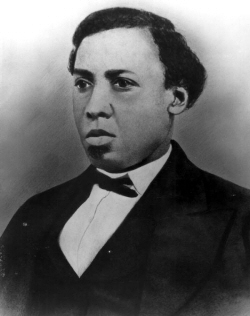 Gibbs was originally trained as a carpenter until in 1848.  Then he became one of only two African Americans accepted at Dartmouth College in New Hampshire.  After graduating four years later he enrolled in the seminary at Princeton University.  In 1852 Gibbs became an ordained minister to black Presbyterian congregations in New York and Pennsylvania.

During the 1850s Gibbs was a political activist who fought of the rights of African Americans.  He aided with the Underground Railroad, campaigned for the expansion of black male suffrage in New York, joined the freedmen’s relief efforts and fought segregation on New York City streetcars.  Gibbs also served as vice president of the Pennsylvania State Equal Rights League.  When the Civil War broke out Gibbs supported black enlistment into the union army.  On January 1st 1863 he gave a rousing speech “A Day to Celebrate Emancipation” to the audience of  First African Presbyterian Church of Philadelphia praising the efforts of African Americans through past heroes like Crispus Attucks up to the African American’s role during the Civil War.  He also praised the recently announced Emancipation Proclamation which took affect that day.

In 1865, Gibbs was by the sent by the Presbyterian Church to Florida to organize churches and schools for the newly freed African Americans.  While in Florida he became active in the newly formed Republican Party and in 1868 was elected to the Florida State Constitutional Convention.  Gibbs was also Secretary of State for Florida in 1868, a post he held until 1872.  His fairness in the administration of his office garnered the respects of his party members as well as some Democrats.

In 1872, Gibbs was appointed Superintendent of Public Education, a position created by the Reconstruction Era Florida legislature.  In that office Gibbs supervised every county’s standard of education and established uniform textbooks throughout the state.  Though the standards for education had improved throughout Florida, he called racial segregation in the schools, which was also mandated by the state legislature, divisive for the overall advancement of education.

After giving a speech at a Republican meeting in 1874 Gibbs later died unexpectedly that night.  The reason for his death is unknown.  Some claim he suffered a heart attack while others speculated he may have been poisoned by his white political enemies.  Regardless of the cause of Gibb’s death, he was greatly respected for his accomplishments and contradicted the claims made by many white southern Democrats that ignorant, illiterate blacks ran the ex-Confederate states during the Reconstruction era.