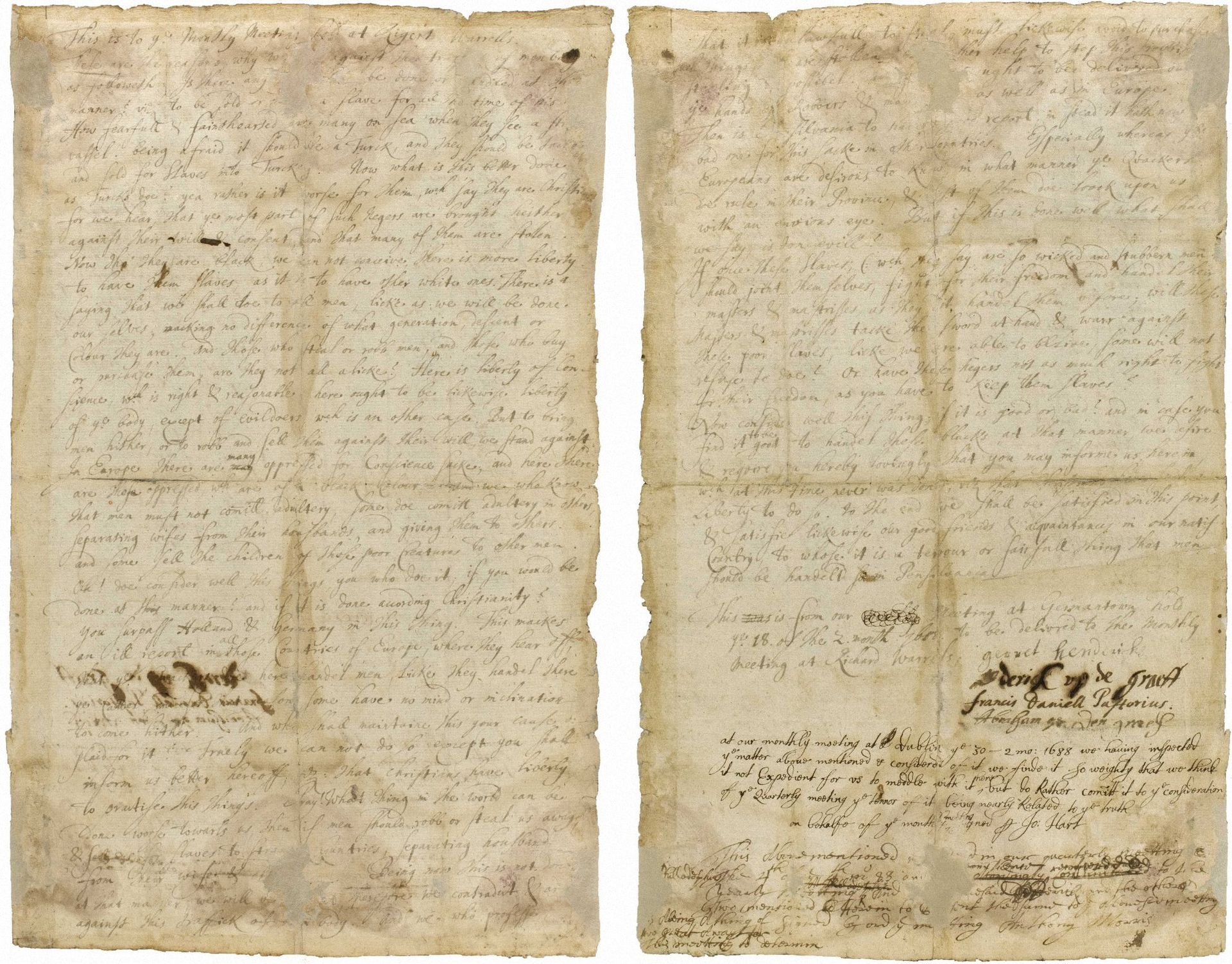 The Germantown Quaker Petition Against Slavery was the first documented protest of enslavement of African Americans made by a religious body in the thirteen colonies. The colony of Pennsylvania was established in 1681 by William Penn, and in 1683, Francis Daniel Pastorius, an educator, lawyer and court official, purchased land from Penn to establish a new German speaking community. Pastorius mapped out a plan for the land, and the colony of Germantown was founded in 1684, a year after a harsh winter stalled the clearing of the land.

Thirteen German-Dutch families were a part of the original land claim. The families all originally came from Holland, and were Mennonites who became Quakers before migrating to Krefeld, Germany, with their own granted land claim. Early settlers to Philadelphia and its surrounding towns were wealthy and either brought enslaved Africans with them or purchased them in the town’s slave blocks.

Early meetings by settlers were held in local houses, until both Mennonite and Quaker Meeting Houses were built by the white settlers although enslaved Africans often built the homes for their surrounding neighbors. The German-Dutch Settlers were not accustomed to owning slaves and found the practice barbaric. In their native land only people who had been convicted of a crime were forced into servitude. They also saw a relation between the right to be free from religious persecution, and the right to be free from forced labor.

Four years after the establishment of Germantown, Pastorius, Abraham op den Graeff, Derick op den Graeff, and Garret Hendericks, drafted a petition against slavery based on The Bible’s “Golden Rule”. In the petition, the vocabulary refers to black slaves as “negers,” the German-Dutch name for black or negro, and was not meant in any derogatory way. The petition took care to show respect for enslaved people and declared them as equals.

The petition was presented at the local monthly meeting at Dublin (Abington). The Quakers decided that the issue was fundamental and just, but too consequential to be judged by such a small body. The petition was then sent to the Philadelphia Quarterly Meeting where it met with the same decision. It was then sent to the Philadelphia Yearly Meeting, and forwarded to the London Yearly Meeting, where there was no evidence of the matter being discussed.

Slavery was not discussed again publicly by the Quakers until 1776 when a proclamation was printed in the Philadelphia Yearly Meeting banning the owning of slaves. Four years later in 1780, now a state in the United States, passed the Abolition Act ending slavery through gradual emancipation. Slavery officially ended in Pennsylvania in 1847 when the last enslaved person was finally freed.

The Germantown Quaker Petition opposing Slavery is preserved in the Quaker and Special Collections at Haverford College in Haverford, Pennsylvania.