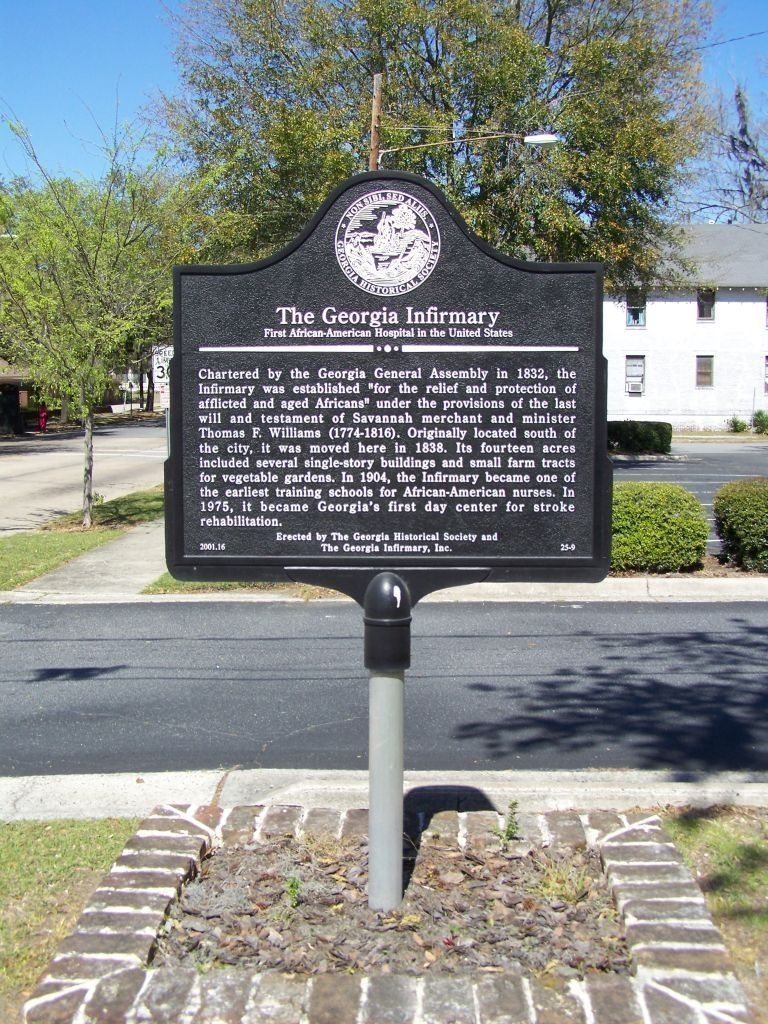 The Georgia Infirmary was the first hospital for African Americans built in the United States. Chartered on December 24, 1832 “for the relief and protection of aged and afflicted Africans,” it was established by the Georgia General Assembly and funded by a $10,000 grant from the estate of Thomas F. Williams, a local merchant and minister. Today the institution is known as the Adult Day Center-Georgia Infirmary and is part of St. Joseph’s/Candler healthcare network.

Mistreatment and poor living and working conditions often left slaves in prematurely bad health, and many were cast out by their owners when they were no longer able to work. Williams’ grant, as well as proposals for the state of Georgia to take on the care of old and unwell slaves while recouping the cost from slave holders, contributed to the impetus for the creation of the hospital. The Infirmary was built 10 miles south of Savannah, Georgia, on a 50-acre parcel of land donated by Richard F. Williams, the brother and executor of Thomas F. Williams’ estate. Richard F. Williams was elected as the first president of the hospital’s board of trustees. Upon the infirmary’s opening, the state government provided $20 per patient a year.

The original site proved unpopular for both trustees and patients; most of the latter were from the city, and the hospital was inconveniently distant for them, while the trustees wanted a site they could more closely supervise. In 1838, the Infirmary was moved to its present day location, a mile from Savannah on Lincoln Street and White Bluff Road, known today as Bull Street. These fourteen acres included single-story buildings and farm tracts. It was advertised as being “well-equipped, having competent nurses, comfortable beds, well-ventilated wards, extensive pleasure grounds, and a good dietary department.”

The hospital’s operation was disrupted during the Civil War and emancipation, but in 1870 twelve new trustees convened, and the hospital received a $10,000 donation from Edward Padelford. The following year, the Savannah City Council was notified the Infirmary would once again be admitting patients.

In 1904, the Infirmary was among the first in the nation to train black nurses. During the 1940s, it was expanded to meet demand from a rapidly growing population moving to Savannah to work in shipyards and productions plants meeting orders for World War II. Because of the growing number of black war workers, the federal government for the first time provided $695,000 in assistance including a wing with 89 beds, five pediatric cribs, an incubator, X-ray, surgical and kitchen equipment, and a heating plant.

In 1974, the Infirmary was renamed the Adult Day Center. It now provides care and rehabilitation for stroke patients as part of St. Joseph’s/Candler healthcare network.