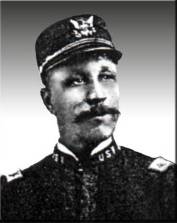 Major George William Ford was an original member of the 10th Cavalry (Buffalo Soldiers) and later a Major with the Second Battalion of the 23rd Kansas Volunteers during the Spanish American War. Ford was born on November 23, 1847, on the Mount Vernon Plantation in Virginia, the home of George Washington. He was the grandson of West Ford, once enslaved and later freed by the Washingtons to become a trusted manager for the estate. George Ford was educated at the Mount Vernon schoolhouse and later worked as a tomb guard at the first president’s burial site.

Ford’s military career started at the age of 19. The Civil War had ended, and in 1866, Congress authorized six regiments of the regular U.S. Army to be staffed by Black troops; two cavalry and four infantry units. Ford joined in 1867, signing with Company L, 10th Cavalry at Fort Leavenworth, Kansas. Like many other free-born and formerly enslaved Black Americans, he moved west in search of better opportunities after slavery. The 10th Cavalry played a crucial role in protecting settlers and railroad construction crews, as well as escorting stages and supply wagons. Ford’s enlistment took him to Kansas, New Mexico, Arizona, and Texas. He served ten years with his regiment and was honorably discharged with the rank of Regimental Quartermaster Sergeant in 1877.

George Ford continued his service with the military when appointed in 1878 as the first Black superintendent at the Chattanooga National Cemetery in Tennessee. He later transferred to Beaufort National Cemetery in South Carolina, where he married Harriet Blythewood. The couple had eight children. He was superintendent at Beaufort for 15 years until he was transferred to Fort Scott National Cemetery in Kansas. Ford took a short leave of absence from Fort Scott to serve as a Major with the Second Battalion of the 23rd Kansas Volunteers during the Spanish American War, where he became friends with Teddy Roosevelt. When Roosevelt was running for vice president, Ford sat as a delegate from Kansas in the Philadelphia National Convention in June of 1900 in support of his candidacy.

Continuing his love of public service, Ford met W.E.B. Du Bois and accepted an advisory position as Secretary of the Army-Navy Committee in the Niagara Movement, a precursor to the NAACP. Major Ford also became the first African American president of the NAACP Branch in Springfield, Illinois, founded in 1915. During his lifetime, Ford would serve 53 years as superintendent of five national cemeteries. He finally retired on October 20, 1930, from Camp Butler National Cemetery in Springfield, Illinois.

Major George W. Ford died on June 20, 1939, at the age of 91. He was honored with a full military funeral and is buried at Camp Butler National Cemetery. At the time of his death, he was the last surviving member of the original 10th Cavalry.