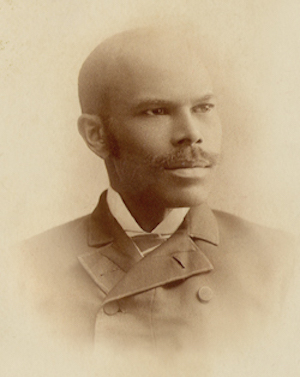 George Washington Fields was born into slavery in Hanover County, Virginia on April 25, 1854. He was one of 11 children of Martha Ann Berkley and Washington Fields. Of the children, one died in infancy, three were sold off, and one was a runaway. Fields and the others grew up on Clover Plain Plantation in northeastern Virginia.

In July 1863, during a battle between Union and Confederate soldiers on the plantation, Fields’ mother escaped along with him and five other siblings. After a few months travel, they reached the safety of Fortress Monroe near Hampton, Virginia.  Fortress Monroe was one of the first Union-occupied fortifications which received escaping slaves.  Those who arrived in 1861 and 1862 were labeled “contraband” and their status as free people was disputed.  By the time Fields and her children reached the fort, they were granted freedom by the Emancipation Proclamation since Hanover County was still in Confederate hands.

The family settled in Union-occupied Hampton.  Fields’ father arrived the next year followed soon afterwards by four siblings whom slavery had earlier dispersed. This was a rare occurrence, an entire enslaved family reunited as free people.

Fields intermittently pursued a public education in Hampton from his 1863 arrival through 1875, while working as a culler on an oyster boat, a hack driver, and as a steamboat waiter.  Finally, in 1875, with his younger sister Catherine’s encouragement, he enrolled at Hampton Normal and Agricultural Institute at the age of 21. Three years later, in 1878, he graduated and headed north for full-time work. A series of menial jobs at famous resorts and as a manservant for prominent families led to a position from 1881 through 1887 as butler for the governor of New York, Alonzo B. Cornell. While in Cornell’s employment, he continued to educate himself through tutors and schools, studying everything from French to medicine. He settled on law as a career, and as was customary at the time, he read law with a local attorney.

Fields intended to attend Yale University law school to complete his legal training.  However, his employer, Alonzo Cornell, the eldest son of Cornell University’s founder Ezra Cornell, persuaded him to enroll in the soon to be opened Cornell Law School. In the fall of 1887, Fields arrived in Ithaca, New York, and three years later he graduated as a member of the school’s inaugural class and its first African American graduate.

Fields returned to Hampton to practice law, joining his older brother who was an attorney and state senator.  Fields took the Virginia bar exam before three judges and was admitted to the Virginia bar in April 1891 at the age of 37. Fields was also active in politics, representing Elizabeth City and James City in the Virginia House of Delegates from 1889 to 1890.

On November 28, 1892, Fields married Sarah (Sallie) Haws Baker, also a graduate of Hampton Institute.  Together they had two children, a boy who died in infancy, and a girl.

In 1896 Fields lost his eyesight.  He continued, however, to be active in civic organizations, serving on the board of the Weaver Orphan Home in Hampton and as a Trustee of the Third Baptist Church in the city and Superintendent of its Sunday School.  Before his death, Fields wrote “Come On, Children”: The Autobiography of George Washington Fields, Born a Slave in Hanover County, Virginia.  The original unpublished manuscript was recently found in the Hampton University Archives.

On August 19, 1932, George Washington Fields died at the Dixie Hospital in Hampton after a brief illness.  He was survived by two sisters, Maria and Catherine, his daughter, Inez C. Fields Scott, and his wife Sallie, who passed away on December 19, 1944.