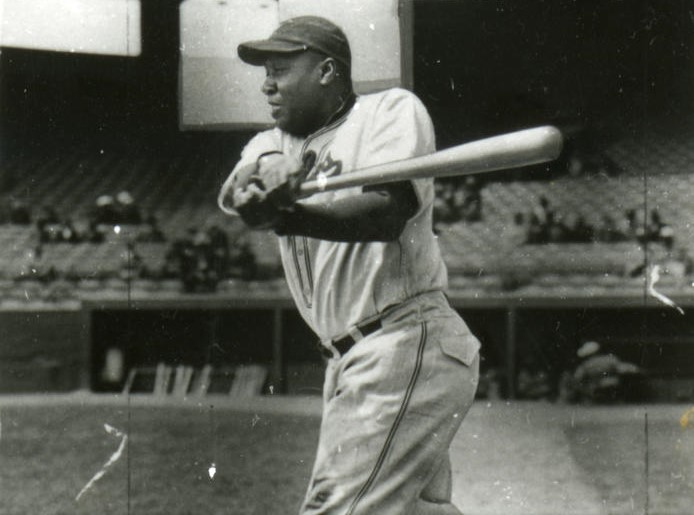 George “Mule” Suttles was a power-hitting first baseman in the Negro Baseball League (NBL). Born on March 31, 1901 to James Suttles, a laborer in the coal mines and Early Griffin Suttles, occupation unknown, in Blocton, Alabama. Suttles worked in the coal mines during his teenage years.

Called “Mule” as a term of endearment for being as strong as a mule and his ability to carry a team, Suttles packed power in his 50-ounce bat. Extremely popular with the fans for hitting booming home runs, “Kick Mule, Kick!” was chanted as Suttles stepped up to the plate.

Suttles began with the Independent Negro League in 1921 playing with Atlantic City Bacharach Giants at the age of 20. His NBL debut came in 1923 playing both first base and outfield with the Birmingham Black Barons for three seasons. Suttles then played with the St. Louis Stars (1926-1931), leading the league with 11 stolen bases, 19 triples, and 26 homers. He won Negro National League championships with them in 1928, 1930, and 1931.

His career included playing with the Chicago American Giants (1929, 1933-1935), Detroit Wolves (1932), and Washington Pilots (1932). Named to the East-West All-Star Game five times, Suttles hit the first home run in the game’s history in 1933. Suttles led the league in home runs twice and on August 11, 1935 during the East-West All-Star Game at Comiskey Park, he struck out once, drew four walks, and with the score tied in the bottom of the 11th inning with two men on base drilled a home run over the right center field fence giving the West an 11-8 triumph. Suttles later played with the Newark Eagles (1936-1940) and New York Black Yankees (1941). Although sources vary, Suttles is credited with 237 lifetime NBL homers.

Retiring from playing in the NBL at the age of 42, Suttles continued with the Newark Eagles as manager from 1943-1944. He managed a Newark, New Jersey bar in 1945 and the Newark Buffalos semi-pro team in 1946. He coached the New York Black Yankees of Rochester, New York in 1948 and umpired the East-West All-Star Game at Comiskey Park on August 22 of the same year.

In February 1949, 47-year-old Suttles married 42-year-old Lucille Childs of Newark, New Jersey. Prevented by segregation from making a name for himself in Major League Baseball, Suttles was posthumously inducted into the Baseball Hall of Fame in Cooperstown, New York in 2006.

George “Mule” Suttles died of cancer on July 9, 1966 in Newark, New Jersey at the age of 65. His former NBL teammates served as pallbearers. He was survived by his wife and no children. Suttles is buried at Glendale Cemetery in Bloomfield, New Jersey.