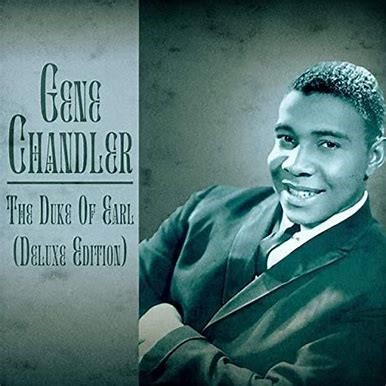 The Duke of Earl: Deluxe Edition album by Gene Chandler
Fair use image

1960s R&B singer Gene Chandler was born Eugene Drake Dixon on July 6, 1937, in Chicago, Illinois. He had one brother, Richard Dixon, a member of the Dukays, R&B group. Before graduating from Englewood High School in Chicago in 1955, Chandler formed the doo-wop vocal group, the Gaytones. In 1957, however, he joined his brother and became the lead singer of the Dukays.  Months later he was drafted into the United States Army and stationed in Germany until his honorable discharge in 1960.

Upon being released from the Army, Chandler immediately returned to the Dukays, and in 1961, Nat Records, which had signed the group, released “Nite Owl.” Also, in 1961 Chandler along with Bernice Williams, and Earl Edwards wrote “Duke of Earl.” For reasons unknown, they were unable to record the song and Vee-Jay Records, after hearing it, offered a contract only to Chandler.  He recorded it and Vee-Jay released it in 1962. The song raced to the top of the Billboard charts and sold a million copies in two months. With his new-found fame Chandler was featured in the 1963 film, Don’t Knock the Twist, singing “Duke of Earl.”

Despite his success as a solo artist, Chandler remained with the Dukays and they again in 1963 released “Nite Owl.” It peaked at #73 on Billboard Hot 100 chart that same year. Chandler left Vee-Jay, and in 1964, he had a Top 20 pop hit which Curtis Mayfield produced called “Just Be True,” and a Top 20 pop hit in 1965, “Nothing Can Stop Me.” In 1969, Chandler bought Bamboo Records and Mr. Chand Records. He then released the soul hit, “Backfield in Motion,” which became his second million-selling hit, reaching #10 on the pop chart.

In 1970, Chandler’s “Duke of Earl” received a gold disc awarded by the Recording Industry Association of America (R.I.A.A) and was awarded The National Association of Television and Radio Announcers “Producer of the Year.” In addition, he teamed with Jerry Butler for the album Gene and Jerry: One on One on the Mercury label. In 1973, Chandler guest-starred with Curtis Mayfield and Butler on the album Curtis in Chicago.

During the height of the Disco era in 1979, Chandler was named executive vice president at Chi-Sound Records and released a series of songs on the label that became hits in the United Kingdom, including “Get Down” that peaked at # 53 in the United States.

Chandler released, Your Love Looks Good to Me, a full-length album on the Fast-fire label in 1985.

In 1997 Chandler was inducted as a Pioneer Award honoree into the Rhythm and Blues Foundation Hall of Fame. In 2002, Chandler’s “Duke Of Earl” was inducted into the Grammy Hall Of Fame. At the age of 68 in 2005, Chandler teamed with Jerry Butler, Ben E. King and Lloyd Price as the 4 Kings of Rhythm & Blues and toured throughout the United States.

Chandler was married to Lillie J. Kennard from Olympia Fields, Illinois. She died in 2013. They had one son, Drake.

In 2016, Gene Chandler was inducted into the R&B Music Hall of Fame. A Chicago street was named in his honor because of his musical and philanthropic contributions. Chandler continues to be an influential music icon at 84.