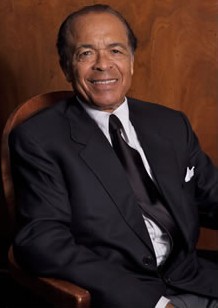 Gary D. Gayton
Courtesy Siebert Brandford Shank & Co., L.L.C, Fair use image
Attorney and businessman Gary D. Gayton has spent most of his adult life as a civil rights advocate for those without a representative voice, including African Americans, Native Americans, and women. He was the country’s first black Assistant U.S. Attorney, appointed to the position by Attorney General Robert Kennedy in 1962.  Later in private practice, his controversial clients included Black Panthers and activists opposing the Vietnam War.

Gary David Gayton was born in Seattle, Washington on February 25, 1933 to Virginia Clark and John J. Gayton. His ancestors were some of the earliest African Americans to settle in the city. In high school he excelled athletically as a track star as well as academically, earning a scholarship to the University of Washington. He earned a B.A. with honors in political science from the school in 1955. After graduation he served for two years in the U.S. Army.

In 1962 Gayton received an L.L.B. from Gonzaga University in Spokane, Washington and was soon afterwards appointed to the position of Assistant U.S. Attorney.  While in office he presented the first Federal prosecution involving a National College Athletic Association (NCAA) college basketball case of point fixing.  He also successfully sued the State of Washington to allow Northwest Native Americans to sell fish outside of reservation property boundaries. In 1966 Gayton was selected as a delegate to President Lyndon B. Johnson’s first White House Civil Rights Conference.

Three years after his Federal appointment Gayton left public law to form the private firm of Stern, Gayton, Neubauer and Brucker in Seattle. As an attorney in controversial cases, Gayton often received telephone threats from angry opponents of his clients and their causes. In addition to his work with the Black Panthers and anti-war activists, in 1972 he successfully argued the antidiscrimination case of Trish Bostrom, a female athlete at the University of Washington and in 1985 he successfully defended Seattle Mayor Wes Uhlman’s appointment of Claude Harris as Seattle’s first black fire chief when the appointment was challenged by powerful national fire fighters and police organizations. In 1977 Gayton was appointed as Special Assistant to U.S. Secretary of Transportation Brock Adams in the Administration of President Jimmy Carter. While in Washington, D.C. he wrote guidelines for minority and women-owned business programs, which were adopted by the Carter Administration in 1978.

Gayton returned to Seattle in 1979 and in 1985 became an investment banker in addition to his work as an attorney. In 1992 he was appointed to serve on President-Elect Bill Clinton’s transition team into the White House.  Six years later in 1998 he was appointed by President Clinton to the executive committee of the National Advisory Council for the Small Business Administration.  Gary Gayton currently lives in Seattle where he is Senior Vice President of Siebert Brandford Shank & Company, a New York-based bond underwriting firm.  Gayton is also a member of Sigma Pi Phi fraternity.