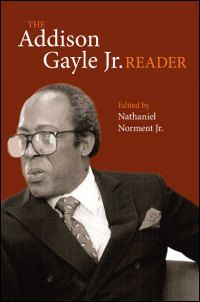 Literary critic Addison Gayle, Jr., born in Newport News, Virginia in 1932, was educated in the local public schools before he attended City College of New York, where he earned a B.A. degree in 1965; and the University of California at Los Angeles (UCLA), where he completed an M.A. degree in English in 1966. He began his career as an educator at Bernard M. Baruch College where he distinguished himself as a professor of English until his death in October 1991.

During the 1960s, a juncture in African American history associated with political, literary and cultural upheaval, militancy, and Black Nationalism, Gayle passionately felt compelled to call for a new Black Aesthetics that radically differed from the standard Eurocentric approach to literature. To advance his new theory Gayle outlined, in controversial public lectures and essays, his vision.  In 1972, he published Black Aesthetic, a collection of essays with contributors such as Darwin Turner, Maulana Karenga, Larry Neal, and Hoyt Fuller.  This important work revisited previous approaches to African American literary criticism and called for new theoretical frameworks that complemented the then ebullient socio- political Black Power Movement.

These critics and scholars were interested in “the function of black literature, the role of black writers and the responsibilities of black audience.” They argued that “Black Art must redefine the definitions handed down from the Western world” to break the cultural strangulation of White Aesthetics. This radical, revisionist critical views expressed by Gayle and leaders of the Black Arts Movement, particularly Amiri Baraka and Larry Neal, reconfigured the relation of literature to culture, the status of culture as cognitive ground and the function of the black critic’s work to affirm black self-consciousness, black power, and selfhood.

Gayle’s culturally grounded approach informed his work, including The Way of the World (1975); two autobiographies, The Black Situation  (1970) and Wayward Child: A Personal Odyssey (1977); and several edited anthologies, including  Black Expressions: Essays by and about Black Americans in the Creative Arts (1969) and Bondage, Freedom and Beyond: The Prose of Black America (1970). He was a regular contributor to The Black Scholar and Black World, journals and magazines whose ideological perspective resonated with his own.