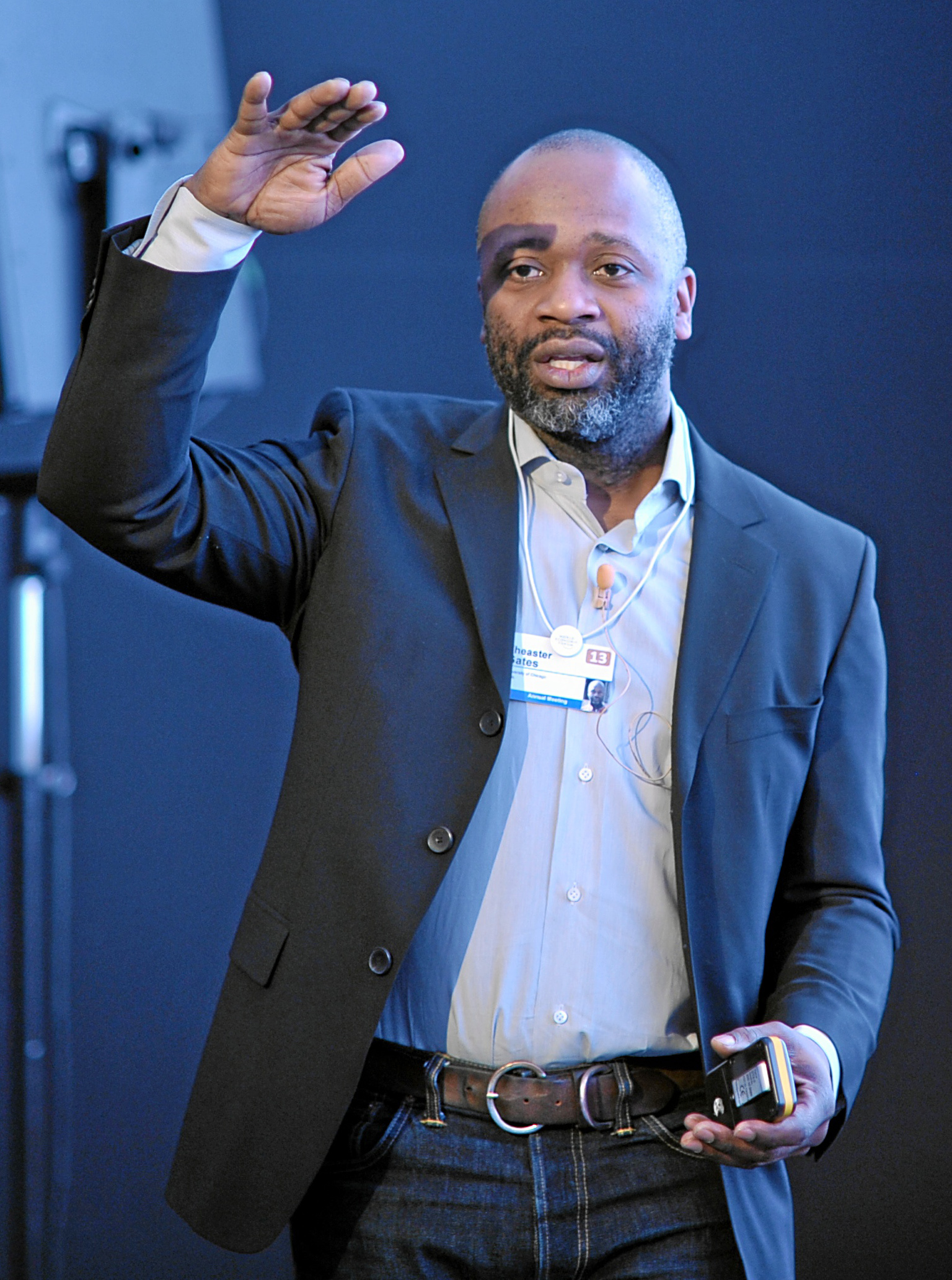 Artist, urban planner, and activist Theaster Gates, born in Chicago, Illinois on August 28, 1973, has gained critical acclaim for his work which engages the Chicago community and urban environment. The youngest of nine siblings and only boy, Gates was raised in Chicago’s West Side. He is the son of Theaster Gates, Sr. who worked as a roofer while his mother worked as a schoolteacher. The artist’s signature works, termed “Real-Estate art,” involve the repurposing of buildings in Chicago’s South Side. In these constructions, Gates creates space for community conversation, blending aspects of performance, sculpture, and music.

Gates’ artistic career began with his education at Iowa State University in Ames, Iowa where he studied ceramics and received a Bachelor of Science in Urban Planning in 1996.  He then earned a Master of Arts from the University of Cape Town, South Africa (1998) and a Master of Science in Urban Planning from Iowa State in 2006.  While at Iowa State, Gates commuted to Ames from Chicago while working for the Chicago Transit Authority. He was hired as an arts programmer for the University of Chicago in 2006 and has served as a faculty member in the university’s Department of Visual Arts since 2014.

In arguably his most famous work, Dorchester Projects (2006), Gates purchased an abandoned building in Chicago’s South Side, which he transformed into a multimedia library. The building houses an enormous collection of the art history slides, CDs, vinyl, and over 14,000 books. This uniquely combined education and community center is also a work of art which reflects Gates’ ideas about sustainability and community development. Gates has created sculptures from materials found in the building, later selling them to support the acquisition of new buildings to house exhibits and other events in these reinvigorated spaces. Located just south of the University of Chicago, Dorchester Projects seeks to provide local residents with greater access to educational materials and to build a bridge between the university and the surrounding mostly impoverished black community.

In July of 2015, however, Gates has come under criticism for suggesting the University of Chicago assume control of programming for the South Side’s DuSable Museum of African American History. Under his proposed model, the University of Chicago would enlist artists, curators, and academics to use the museum space to help support the financially struggling museum. The proposal was immediately opposed by South Side residents and long-time patrons and supporters of the DuSable who feared a loss of the institution’s independence. Opponents of the plan issued a statement that such a re-envisioning of the DuSable Museum’s operations would not reflect the mission set out by founder Margaret T. Burroughs.

Despite the controversy, Gates continues to receive commendation as both a social activist and artist. He is the founder of the nonprofit Rebuild Foundation that seeks to provide greater cultural activities in historically underprivileged areas such as Chicago’s South Side.  He also serves as the director of the Arts + Public Life initiative at the University of Chicago. Gates’ work has exhibited both nationally and internationally at the Whitney Biennial, New York (2012); dOCUMENTA (13), in Kassel, Germany (2012); and the Museum of Contemporary Art, Chicago; among other locations. He is the winner of the Artes Mundi 6 award, Great Britain’s top prize for international contemporary art.