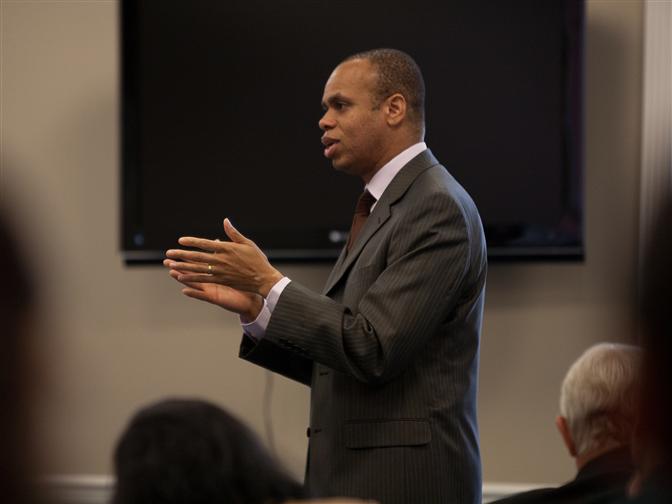 Patrick Gaspard’s career in politics and diplomacy spans three decades. Gaspard’s work has involved him in politics at the city and national level and has put him in contact with constituencies traditionally associated with the Democratic Party. As of this writing, Gaspard serves as United States Ambassador to the Republic of South Africa.

Gaspard was born in the Democratic Republic of Congo to Haitian parents. His father, a lawyer, moved the family to the African nation after Prime Minister Patrice Lumumba issued an appeal for French-speaking intellectuals of African descent to relocate there after the Congo’s independence. After Lumumba’s death in 1961, Gaspard’s family then moved to New York City, New York when he was three years old.

Gaspard got his start in politics in the late 1980s, when he began working as a community organizer. Initially, he focused on issues related to educational reform in New York City. In 1988, Gaspard worked on Jesse Jackson’s presidential campaign. In 1989, he worked on David Dinkins’s New York City mayoral bid.

Gaspard’s visibility in New York City politics propelled him onto the national stage. In 2004, he served on Howard Dean’s Democratic presidential primary campaign as national deputy field director. After Dean’s defeat, Gaspard worked as national field director for America Coming Together, which was a progressive political action organization that strived to increase voter participation.

Beginning in June 2008, Gaspard worked on behalf of another presidential hopeful, signing on as Illinois Senator Barack Obama’s national political director. After Obama’s victory, Gaspard stayed on to serve as associate personnel director of President-elect Obama’s transition team. From 2009 to 2011 he worked in the White House as assistant to the President and Director of the Office of Political Affairs.

As President Obama approached the end of his first term and his re-election bid ramped up, Gaspard moved over to the Democratic National Committee, where he held the position of executive director from 2011 to 2013. Gaspard has also served as the Executive Vice President and Political Director of the Service Employees International Union (SEIU).

In spring 2013, President Obama nominated Gaspard for the post of United States Ambassador to the Republic of South Africa. After U.S. Senate confirmation, Gaspard was sworn in on August 26, 2013

Gaspard and his wife Raina have two children.