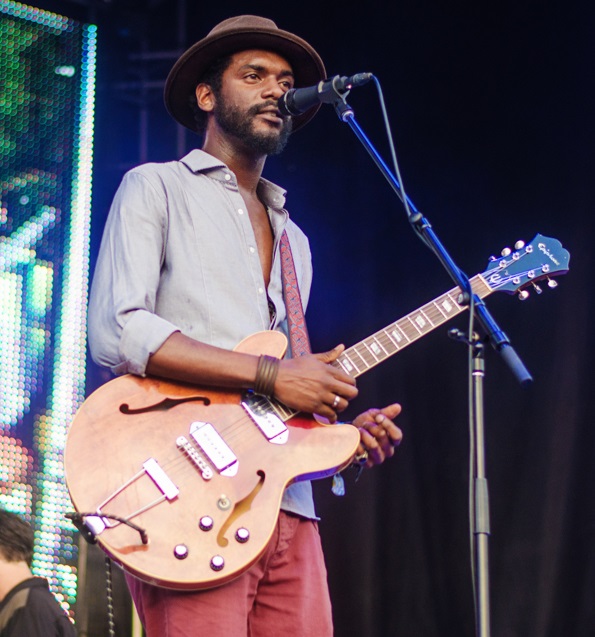 Blues Guitarist Gary Lee Clark Jr. was born on February 15, 1984, in Austin, Texas, to Sandy Clark and Gary Clark Sr., a car salesman. Clark received the first guitar at Christmas when he was 13, an Ibanez RX20. During that time, he read music studies books from the Covington Middle School library in Austin and graduated from Austin High School in 2002.

In 2007, Clark was cast as a young musician in the film, Honey dripper, starring Danny Glover as the owner of a traditional blues club that is not progressing financially and about to be lost until he hires the youthful guitarist engaging and attracts large audiences.

In 2011, he signed with Warner Brothers Records and released The Bright Lights EP. Clark was Spin’s Magazine’s breakout artist for November 2011 and was awarded its “Golden Corndog Award” for performing in numerous significant North American Music Festivals in 2012. Later that year he released the album, Blak and Blu.

In 2014, Clark achieved global recognition at the 56th Annual Grammy Awards; he won the “Best Traditional R&B Performance” for “Please Come Home” from his Warner Brothers Records debut album Blak and Blu. It peaked at no. 6 on the Billboard 200 album chart and no. 1 on the Blues Albums chart. Also, the album, Live, reached no. 26. In 2015 he released the studio album, The Story of Sonny Boy Slim which reached no. 1 on the Billboard Top Blues Albums. During that year, on a tour of Europe, Clark presented a concert at the annual Paléo Rock Festival de Nyon in Nyon, Switzerland, as part of JamBase’s celebration of African American Music Appreciation Month. He was also invited to perform on the “Late Night with Seth Meyers.”

Clark performed on the “Late Show with Stephen Colbert” in 2016. The following year, Clark and model Nicole Trunfio from Australind, Australia, were married on April 17, 2016, at the Colony Palms Hotel in Palm Springs, California. They are parents of son, Zion Rain, and daughters, Gia Leblane and Ella Wolf Clark.

In 2019, Clark performed “This Land” on Saturday Night Live, The Ellen DeGeneres Show, and The Howard Stern Show. He returned to Europe to perform at the legendary venue La Cigale in Pigalle, Paris, France. In Australia, he performed at The Forum Melbourne, Thebarton Theatre Adelaide, and Perth Concert Hall.

At the 62nd Annual Grammy Awards, Clark won for “Best Rock Song” and “Best Rock Performance” for his song “This Land.” The song was also nominated for “Best Music Video” and selected for “Best Contemporary Blues Album.” The album reached no. 6 on the Billboard Top 200. In addition, to composing awarding-winning scores, Clark’s television appearances for 2020 included “Good Morning America, The CBS Morning Show, and The Today Show. In 2021, Clark performed at the grand opening of The Theater at Virgin Hotels in Las Vegas, Nevada. He sang three songs at the theater, “Bright Lights,” “Travis County,” and “Nextdoor Neighbor Blues.”