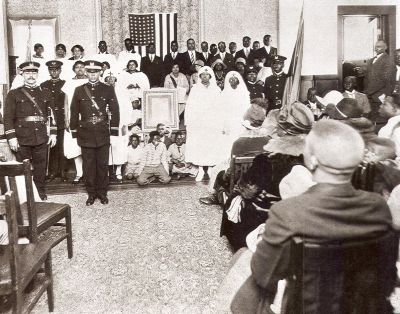 In the article below historian Robin Dearmon Muhammad discusses the growth of the Universal Negro Improvement Association (UNIA) or the Garvey Movement in the American West, with particular emphasis on its influence in black working-class organizing in the San Francisco Bay Area after World War I.

Garveyism found an unlikely frontier in the American West. Marcus Garvey, founder of the Universal Negro Improvement Association (UNIA) visited the American West only a few times but the work of the UNIA had a lasting impact on the black experience in the region. Promoting black self-help, black pride, and African liberation, UNIA members in the west tied international developments in Latin America, Asia, and Africa to their own aspirations for black advancement. As they observed the expansion of American influence across the Pacific, the western African Americans local UNIA divisions demonstrated an international perspective that assisted them in defining their place in the west and the larger Pacific economy.

Black workers formed the backbone of the UNIA in the west and set the word out about the UNIA took many forms. The UNIA newspaper, the Negro World challenged the rising tide of racial hostility toward people of color throughout the west. Covering stories of African American achievement in the region that might not otherwise be reported in the mainstream press, the Negro World chronicled the progress of black labor and civil rights organizations as well as black businesses. The Negro World also reported on uprisings and revolutions in Latin America and Asia that mirrored the aspirations of the Garveyites’ own fight for black freedom.In that way, the newspaper tied these relatively small western communities to ongoing global struggles for racial justice.

Mass rallies, regularly described in Negro World were another common organizing method of black workers in the west. Such organizing paralleled the efforts of Garveyites in the region and those engaged in organizing for black railroad and dock workers were often members of the UNIA. Their presence in both camps forged a powerful alliance. Black western dock workers, for example, were inspired by Garvey’s call for African unity but they also represented a decades-long tradition of efforts by black fraternal and benevolent organizations to improve black life in the region’s cities.

By the end of the 1920s, 1,228,592 African Americans lived in the western United States, representing 5% of the region’s total the 98th meridian and the Pacific Ocean. The first major wave of black pioneers arrived in the west after the Civil War mostly as homesteaders, Buffalo soldiers, and ranch hands. By the eve of World War I, however, more than 100,000 blacks lived in the West’s ten largest cities where they were employed mainly in passenger rail service, waterfront work, and domestic service. Garveyism thrived in major urban areas like New York and Chicago and flourished in numerous small towns across the south. Less well known is its influence among western black urban populations. By 1924 there were divisions (chapters) in Omaha, Seattle, San Diego and Dallas and almost every city between them. In many ways Garvey’s ideology fit in well with the American West’s reputation for reinvention and life-changing opportunities. Self-help, including supporting black businesses, and sustaining black consumer cooperatives, was crucial to African Americans living far from large black communities back East.

The UNIA as a global organization also linked the political movements of black people to other groups struggling against racism and imperialism. Locally, the internationalist discussions among Garveyites were presented through lectures and debates at each UNIA’s Liberty Hall in Oakland, Seattle or Los Angeles. Public lectures on the history of the struggles among people of color all over the world were common at these meeting sites. Black workers in these cities and particularly those who worked on the ships as cooks and stewards, or along the waterfront also drew strength from a general political and economic orientation of maritime trade and international politics. They, perhaps more than other black workers across the nation, recognized the connection between their struggles for economic stability and the growing role of U.S. trade connections with Latin America and Asia.

UNIA divisions dotted the western landscape. Since the UNIA required only seven prospective members to establish a division, small black western communities in places like Mesa, Arizona, Coffeyville, Kansas, Colorado Springs, Colorado, and Wasco and Victorville, California soon emerged by 1921. With a scattered black population in the west, the UNIA appealed to those in isolated communities who saw themselves as part of a wider black economic and political world. Perhaps it was even more important for a black woman or man in Wasco or Mesa to become a UNIA member than someone in a much larger community. In fact, many of because western Garveyism did not rely on direct control from New York headquarters of the UNIA, the Association’s decentralized structure allowed its local divisions a great deal of autonomy. Thus, western UNIA divisions offered global connections simultaneously with local control.

The visits of Marcus Garvey also tied black westerners to the UNIA. Local UNIA leaders made elaborate arrangements for Garvey and his wife, Amy Jacques Garvey, to visit the west between 1920 and 1922. During one tour of Los Angeles in June 1922 Mayor George Cryer’s representative introduced Garvey, in an attempt to appeal to a growing black constituency in that city. It is estimated that 10,000 people came to see Garvey’s speech. According to historian Emery Tolbert, that total Garvey spoke to smaller if no less enthusiastic crowds in Oakland, Seattle and other western cities, as well as on that tour. Despite such a vigorous showing of Garveyism in Los Angeles, disagreements with the national office over financial disclosure and the management of the Black Star Line led to a splintering of the Los Angeles UNIA long before Garvey’s deportation.

Going to Liberty Hall was a family affair for African Americans in the West. At regular Sunday meetings, “Garvey children,” as they were called, received instruction in black history and literature. Playing with dolls and illustrated books depicting black heroes, black angels, and black soldiers, these African American children were encouraged to think of themselves as intelligent, capable, and promising members of the community. As they grew older, young African Americans could join the African Legion for men or the UNIA Motor Corps for women. Each of these auxiliary groups put men and women in uniform and prepared them for military involvement in the ultimate liberation of Africa or local resistance against the Ku Klux Klan (KKK).

Black Cross nurses, another UNIA women’s group, provided basic medical training and health care to community members. Although UNIA men were most often in leadership positions, the Garvey philosophy enabled Association women to link their church and community activism, including consumer cooperatives, with a growing national and international movement. Liberty Halls throughout the west remained one of the most lasting physical legacies of Garveyism even after Garvey was gone.

As Garveyism waned in the late 1920s many organizing techniques of the UNIA, such as mass meetings and rallies, assisted black workers’ direct action against white union racism. The Brotherhood of Sleeping Car Porters (BSCP) emerged as the strongest black labor union in the west, and attracted many Garveyites. Despite friction between Marcus Garvey and A. Philip Randolph, the President of the national BSCP union, local labor-UNIA coalitions propelled black workers in Oakland, San Francisco, Seattle, Los Angeles and other cities into a mass movement demanding labor rights and civil rights.

When Marcus Garvey was deported to Jamaica in 1927, class and other fractures erupted in UNIA divisions in the west, as well as throughout the country. While some divisions remained loyal to Garvey and the original UNIA, others pushed for a more mainstream approach and greater alliance with other civil rights organizations, such as the NAACP. Some divisions split in two, as happened in Oakland and Seattle, while others held together for another decade. Garveyism in the American West faded rapidly during the Great Depression but it had laid the foundation for future generations to pursue racial pride, economic self-sufficiency, and international solidarity in years to come.

Dearmon Muhammad, R. (2012, April 21). Garveyism Looks Toward the Pacific: The UNIA and Black Workers in the American West. BlackPast.org. https://www.blackpast.org/african-american-history/garveyism-looks-toward-pacific-unia-and-black-workers-american-west/