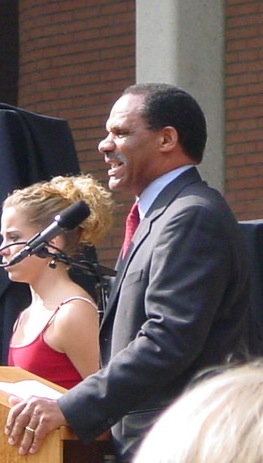 Michael Lockett Garrett is a Heisman Memorial Trophy (Heisman Trophy)-winning footballplayer who spent eight years playing in the National Football League (NFL) before becoming athletic director for The University of Southern California (USC), and then Langston University. He was born on April 12, 1944 in Los Angeles, California. He is now married to Suzanne Garrett and the couple have four children, Sara, Daniel, Michael, and John.

Mike Garrett graduated from Roosevelt High School in Los Angeles in 1961. There he excelled in both football and baseball, and was awarded the Los Angeles Player of the Year award during his senior year. After high school Garrett went to USC, where he played football. During his career at USC Garrett played tailback and had a total of 3,221 rushing yards. At the time this was one of the highest rushing yard totals by a college player, and his performance on the field earned him the 1965 Heisman Trophy. Garrett graduated from USC in 1967 with a degree in sociology.

Garrett’s time at USC led to his being drafted in the second round of the 1966 NFL draft, and he went on to play four years with the Kansas City (Missouri) Chiefs, earning a Super Bowl ring with the team’s victory in 1970. He would later play for the San Diego Chargers where he spent another four years before leaving the NFL following the 1973 season. In 1985 Garrett was inducted into National Football Foundation and College Hall of Fame. Garrett returned to school and earned a law degree from Western State University College of Law in 1986.

In 1993 Garrett returned to USC as athletic director, a position he would hold until 2010. Over the course of his 17 years as athletic director Garrett would oversee 19 USC athletic programs, both men’s and women’s, including soccer and water polo, that he added. Many areas saw growth during Garrett’s tenure, both monetarily and scholastically. During his time as athletic director records were set in merchandising and corporate sponsorships. He also increased the total number of women’s scholarships awarded by USC by 42, making it the maximum allowed by the National Collegiate Athletic Association (NCAA).

In 2010 Garrett was fired by USC in the wake of sanctions imposed by the NCAA following an investigation into the university’s athletic program. In 2012 he took a new job as athletic director at Langston University, a historically black college in Oklahoma. He remained at Langston University until 2015. Beyond his roles, both on and off the field, related to football, Garrett has also taken part in youth programs in the Los Angeles area. In an attempt to help with gang youth in the city he started the East Los Angeles Youth Activities. He has also contributed to the formation of multiple charity sports programs across the nation.