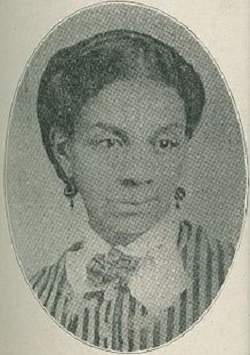 Sarah Smith Tompkins Garnet was the first African American female principal in the New York public schools.  The eldest of eleven children, she was born Minsarah Smith in Brooklyn in 1831.  Her parents, Sylvanus and Ann Smith, were prosperous farmers of African, European, and Native American ancestry.  Sarah S.T. Smith was the older sister of Susan Smith McKinney Steward (1847-1918), the first African American female in New York state to graduate with a medical doctorate (M.D.).

Sarah Smith led a long and distinguished career in the New York public schools.  She began as a teacher’s assistant in 1845 when she was fourteen years old and retired as a principal in 1900. Garnet had two short-lived marriages.  Her first husband, Samuel Tompkins, died circa 1852. Her two children from that marriage also died prematurely.  In 1879, she married abolitionist and minister Henry Highland Garnet.  She was widowed again when her husband died in 1882, two months into his post as United States minister (ambassador) to Liberia.

An active supporter of woman suffrage and African American civil rights, Garnet was also a businesswoman.  She owned a seamstress shop in Brooklyn from 1883 to 1911.  In the late 1880s, Garnet helped found the Equal Suffrage Club, a Brooklyn-based club for black women.  Sarah Garnet also served as superintendent of the Suffrage Department of the National Association of Colored Women.  As a member of the Equal Suffrage Club, Garnet supported the Niagara Movement, a predecessor to the National Association for the Advancement of Colored People (N.A.A.C.P.).  In 1911, Garnet accompanied her sister, Susan Smith McKinney Steward, to London, England, for the first Universal Races Congress.  Just weeks after she returned from Europe, Garnet died peacefully at home, at the age of 88.