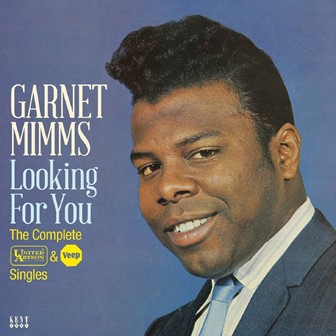 Looking for You: The complete United Artists and Veep singles by Garnet Mimms
Fair use image

Rhythm and Blues singer Garnet Edward Mimms was born on November 16, 1933, in Ashland, West Virginia, to Eugene Mimms and Fannie Mae Blackwell Mimms from Yanceyville, North Carolina. They had seven children and moved to Beckley, West Virginia. Mimms began his career as a choral and gospel music singer at the Ebenezer Baptist Church and later ventured into the soul and rhythm and blues genres. After graduating from the all-black Stratton High School in Beckley in 1951, he and his family left Ashland for Philadelphia, Pennsylvania.

In 1953, 20-year-old Mimms performed with three early R&B groups, The Evening Stars, The Harmonizing Four, and The Norfolk Four. The following year, 1954, he joined the United States Army. While serving, Mimms put together an R&B group, the Deltones. When he was discharged from the Army in 1958, he returned to Philadelphia and formed the Gainors, a doo-wop quintet. This ensemble recorded singles for Red Top and Mercury from 1959 to 1960 and Tally Ho in 1961.

In 1961 Mimms left Gainors to form a new group, Garnet Mimms and the Enchanters. The group moved to New York and began to work with the songwriter and record producer, Bert Berns. In 1963, he launched his first album, Mimms and The Enchanters and released “Cry Baby.” The record peaked at #4 on the Billboard Hot 100 chart for 14 weeks and sold more than one million copies. Mimms also released through United Artists Records, a single, “For Your Precious Love,” which hit the Billboard Top 30 that same year (1963), as did “Baby Don’t You Weep,” the flip side of the record. This was one of the first two-sided R&B hits of the 1960s. It peaked at #26 for nine weeks on the charts in 1964. Despite this success, Mimms and the Enchanters were short-lived and dissolved later in 1964.

In 1966, Mimms composed the music and lyrics for single, “Keep on Smiling.” It was released on the Veep label but garnered little success. Mimms went into an 11-year hiatus and returned to recording in 1977 with the disco-funk single “What It Is” for Arista Records as Garnet Mimms and the Truckin’ Company. The record peaked at #38 in 1977 and reached number 44 for one week on the United Kingdom Singles Chart. Upon reaching the age of 44 that year and being a devoted Christian, Garnet Mimms tried very hard to retire from the commercial music industry. However, in 2005, he was back on the music scene with the single, “Back to my Roots,” and in 2007, he released the gospel album Anybody Out There? on the Evidence label.

In 1999 Mimms received the” Rhythm and Blues Foundation Pioneer Award for Individual Artist” in Los Angeles for his 1963 hit, “Cry Baby.”

Garnet Edward Mimms and his wife Deloris Emma Mimms, reside in Philadelphia, and he is no longer involved in the entertainment business. The couple have one daughter.