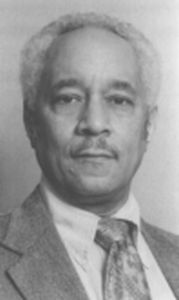 Ralph Alexander Gardner, hard plastics pioneer and one of the scientists and technicians who worked on the Manhattan Project which developed the atomic bomb, was born December 3, 1922 in Cleveland, Ohio, son of Vivian and Clarence Gardner.  Gardner developed an early love of chemistry, certain that he wanted to pursue a career in the sciences as early as ninth grade. He graduated from John Adams High School in Cleveland, Ohio and began college at the Case School of Applied Science in 1939 which later became part of Case Western Reserve University.

Gardner was unimpressed with the school and transferred to the University of California, Berkley before finally graduating from the University of Illinois with a degree in Chemistry in 1943.  He then took a research position at the University of Chicago’s Argonne National laboratory and worked for the next four years on the Manhattan project. He engaged in highly classified plutonium research which was crucial in the development of the atomic bomb.  Gardner was one of several African American scientists employed on the Manhattan project. Others included Lloyd Albert Quarterman, Edward A. Russell, Moddie Taylor, Harold Delaney, Benjamin Scott, J. Ernest Wilkins, and Jaspar Jefferies. George Dewitt Turner, Cecil Goldsburg White, Sydney Oliver Thompson, William Jacob Knox, Robert Johnson Omohundro, and George Warren Reid, Jr. also participated in various phases of the project.

Even after holding such a prestigious research position in World War II, Gardner was unable to find academic or professional work after the conflict ended. From 1947 to 1949 he worked as a waiter before finding work as a chemist for Standard Oil Company in Cleveland. He returned to graduate school at Case Western Reserve in Cleveland, Ohio, earning a master’s degree in 1952 and a Ph.D. in 1959.

Ralph Gardner added “Chavis” to his surname later in life to honor John Chavis who in 1792 became the first African American to enroll in Princeton University.