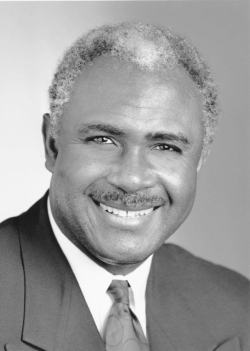 Harvey B. Gantt, architect and politician, was born January 14, 1943 in Charleston, South Carolina to Christopher and Wilhelmenia Gantt.  In 1961, Gantt attended Iowa State University.  After one year of study, he returned to South Carolina and soon afterwards sued to enter racially segregated Clemson University.  On January 16, 1963, the U.S. Court of Appeals ordered Clemson to admit Gantt who became its first African American student.  He graduated with a bachelor’s degree in architecture from Clemson with honors in 1965. In 1970, Gantt earned an M.A. in city planning from the Massachusetts Institute of Technology.

During the 1970s, Gantt worked at various architectural firms in Charlotte, North Carolina, where he settled after receiving his degree from MIT. Between 1970 and 1971, he collaborated with civil rights activist Floyd B. McKissick to design Soul City, North Carolina, an experimental interracial community in eastern North Carolina.  In 1971, Gantt left the Soul City project, returning to Charlotte to launch an architectural firm with Jeffrey Huberman.  Some of the firm’s projects include the construction of the Charlotte Transportation Center, Transamerica Square, and First Ward Recreation Center.

In 1974, Gantt’s political career began with his appointment to the Charlotte City Council to fill the seat vacated by Fred Alexander, the council’s only black member.  Gantt served on the council until 1983. While on the council, he encouraged black voting and reformed the process of electing city council members.  In 1983, Gantt was nominated as the Democratic candidate for mayor and elected as Charlotte’s first and, to date, only black mayor.  He won the election with 52 percent of the overall vote and 36 percent of the white vote and then served a four-year term as mayor.  Gantt unsuccessfully ran two U.S. Senatorial campaigns against Republican Senator Jesse Helms in 1990 and 1996.   In the close and particularly bitter 1990 contest, Helms’ campaign used shrewdly-crafted TV ads targeting white fears about affirmative action, which Gantt’s supporters claimed were racially motivated.  Nonetheless, Gantt received 47 percent of the vote in the race against the nationally-known incumbent senator who had held the seat 17 years.

Gantt currently manages a successful architectural firm and remains active in politics. He has served on the North Carolina Democratic Party Executive Council, the Democratic National Committee, and the National Capital Planning Commission. Gantt has also received awards from the Charlotte branch of the National Association for the Advancement of Colored People (NAACP) and the Lifetime Achievement Award from Leadership Charlotte in 2006.  He has also received honorary degrees from Belmont Abbey College, Johnson C. Smith University, and Clemson University.

Harvey Gantt, a member of Sigma Pi Phi fraternity, lives with his wife Cindy in Charlotte. They have four children: Sonja, Erika, Angela, and Adam.