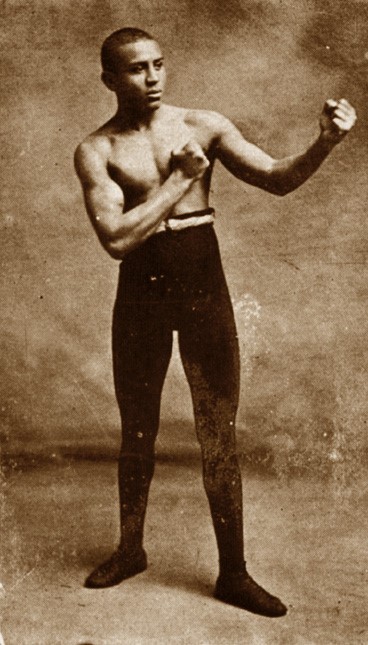 Joe Gant, who was given the name Gans by the press, became the first American and African American to hold a world boxing title when he defeated Frank Erne in Fort Erie, Canada, in 1902 to take the World Lightweight Boxing Championship. Gant was born Joseph Saifus Butts on November 25, 1874, in Baltimore, Maryland. The names of his parents are unknown, and he was orphaned at age four and raised by his foster mother, Maria Gant. Gant later married and divorced Mary Beulah Gant. The couple had two children before he began competing in amateur fights.

Gant’s professional boxing career began in 1891 when he was seventeen. He was a self-taught fighter, learning his craft by studying other boxers’ moves and competing in the then-popular Battle Royal contests where he and a dozen other fighters boxed blindfolded until only one contestant was left standing. These contests helped him develop strong boxing fundamentals and strategic ways to endure long bouts in the ring. His scientific approach to boxing and his famous left jab eventually earned him the title “The Old Master.”

On Labor Day, 1906, in Goldfield, Nevada, Gans participated in his most famous bout, which at the time was labeled the first “Fight of the Century.”  He took on Oscar “Battling” Nelson. Nelson, born Oscar Mattaeus Nielsen, began boxing at age fourteen and compiled a string of wins by the time he faced Gans, who was eight years his senior. This fight was promoted by Tex Richard of Goldfield, Nevada, who later would promote the more famous 1910 heavyweight title “Fight of the Century” in Reno, Nevada, between Jack Johnson and Jim Jeffries, as well as other high-profile boxing events.

Gans fought Nelson for forty-two rounds and knocked him down a number of times during the fight. On occasion, Gant helped Nelson get up and gave him time to recover. Gans continued to fight even after breaking his hand in the thirty-third round. Although Gans won the fight, he received $11,000 while his defeated opponent claimed a $20,000 purse. However, Gant had bet on himself, a practice legal at that time in Nevada, which increased his winnings.

Gans would compete in at least ten more fights over the next four years with half of them ending in knock-outs of his opponents. With his winnings in Nevada and elsewhere, Gans returned to Baltimore where he built the Goldfield Hotel, a saloon and rooming house. By this time, he was prominent in the U.S. sports world, and his persona would be used as a model in Ernest Hemingway’s 1916 short story, A Matter of Color, which was an early critique of racial prejudice.

When Gans retired from the ring in 1910, he had held the world lightweight champion from 1902 to 1908 and had over one hundred and fifty wins with one hundred knockouts during his professional boxing career. He had also fought in three divisions: featherweight, lightweight, and welterweight during his nineteen-year career.

After falling ill and being bedridden in Prescott, Arizona, for some months due to tuberculosis, he journeyed home to Baltimore to see his mother and two children for the last time. Hundreds gathered at his train stops along the way to see the “Old Master.”  Joe “Gans” Gant died in Baltimore on August 10, 1910.  He was thirty-six years-old.