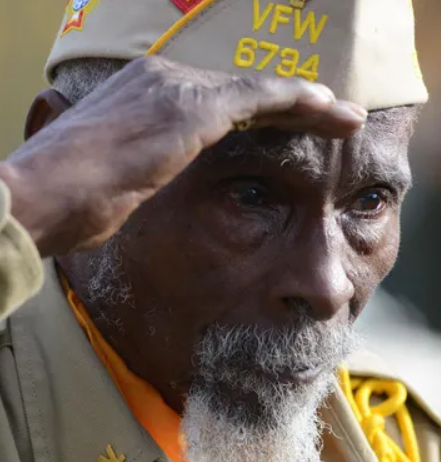 Tomie Louis Gaines was born on November 3, 1922 to Sally Gaines Glenn and Fred Glenn in Hartwell, Georgia. Gaines served in the early twentieth century with the last of the Buffalo Soldiers, the nineteenth century regiments commissioned immediately after the Civil War. Gaines served in World War II from March 1943 to December 1945 with the 27th Cavalry Regiment (Horse) (Colored), 5th Cavalry Brigade, and the 2nd Cavalry Division of the U.S. Army.

A medic during the war, Gaines spent time in Italy, Japan, and the Philippines. He tended soldiers on the beaches of Normandy on D-Day, patched the wounded in a field hospital in Italy, and was injured by German bombers in the aftermath of the raid. He was known to treat enemy troops with the same care and respect as he did his fellow American soldiers.

Following his discharge from the army, Gaines settled in Nicholtown, a predominantly African American community in Greenville, South Carolina, where he worked for various companies, including Transit Homes, Inc., the Arrow Shirt Company, and a janitorial service. He also worked as a truck driver and retired painter. In 1965 he married Clara Mae Smith, and they had three children.

Gaines was a lifelong member of the Veterans of Foreign Wars (VFW) Post #6734, and was very much involved in their activities and events. He was also a lifetime active member of the Post’s acclaimed Honor Guard, and until just before his death he still maneuvered and fired the unique World War II M-1 rifles with drill-team precision at veterans’ funeral ceremonies. Whenever Gaines entered the Post’s building, his comrades would shout, “Buffalo Soldier! The living legend!”

In interviews about his military service, which he preferred not to discuss, he would say only that the war hurt. It made “… men out of boys and left scars above and below the surface. It hurts sometimes. It’s not the matter of fact of who did what, as long as it’s over.”

In Greenville on February 14, 2016, at the age of ninety-three, Tomie L. Gaines passed away. Some friends and family remember him for his handlebar mustache and his love of fast driving. He was full of energy and ideas; he never seemed to sit still for long, and he attended every Veterans Day ceremony he could. He loved boxing and getting into fights. “When he got through fighting, he would always have his hand out,” said Tommy L. Gaines Jr., his son.

In addition to his son Tommy, Tomie Louis Gaines is survived by Clara Mae Smith, his wife of fifty-one years, daughter Cynthia Hudson, a second son, Jesse Williams, who preceded his father in death, and a godson Jimmy Martin, as well as five grandchildren.