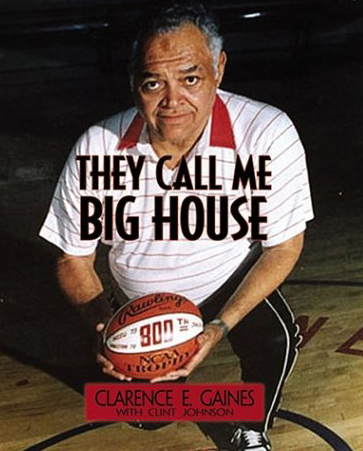 College Basketball has had many legendary coaches that have become household names through their success on the court. For Coach Clarence Edward Gaines, known as “Big House” for his large frame, winning was a habit that led him to the Naismith Memorial Hall of Fame in 1982. While his success on the court led to his recognition among basketball fans, his name would become well known in the community in which he coached for almost fifty years.

Clarence “Big House” Gaines was born in Paducah, Kentucky on May 21, 1923 to parents Olivia and Lester Gaines. Young Gaines was the salutatorian at Lincoln High School in Paducah and then matriculated to Morgan State University in Baltimore, Maryland. It was there he earned the nickname “Big House.” The legend goes that Gaines was told by a business manager at the school, “I never seen anything bigger than you but a house.” The name would stick.

Gaines was a three-sport athlete in football, basketball and track. His best sport was football, where he received All-American honors. He graduated from Morgan State in 1945, with a Bachelor of Science in Chemistry. He had plans to attend dental school, but was convinced to put those plans aside temporarily by Eddie Hurt, one of his college coaches. Hurt connected him with Brutus Wilson, an alumni of Morgan State, who was a coach as Winston-Salem Teacher’s College. There, Gaines could coach both football and basketball.

Winston-Salem State University (as it would later be renamed in 1963 by the North Carolina state legislature, is a historically black college in Western North Carolina. At this small college, Gaines served as football and basketball coach, athletic director, ticket manager, and trainer. While only coaching football from 1946 to 1949, Gaines was recognized for his success when the Central Intercollegiate Athletic Association (CIAA) named him football coach of the year.

Gaines’ greater success came in basketball. Over a coaching career that spanned five decades, Gaines won a Division II National Championship in 1967, and was named CIAA coach of the year in basketball five times. When he retired in 1993, his record stood at 828-447. At that point only four men’s basketball coaches had won more games.

His consistency was also noteworthy. Gaines’ teams won 20 or more games in 18 different seasons. Gaines admitted later in his career that the reverse of Jim Crow laws had actually hindered his team. He believed that he was able to recruit talented black players in the Jim Crow era easier because he coached at an HBCU. However, as the larger programs became racially integrated, it was harder for his small school to maintain the talent levels it once had.  Gaines was notable also for coaching some well-known individuals including future NBA star Earl Monroe and current ESPN commentator Stephen A. Smith.

Gaines, a member of Sigma Pi Phi fraternity, passed away due to complications from a stroke on April 18, 2005 in Winston-Salem. He was 81 and was survived by his wife, Clara, and children Lisa and Clarence.