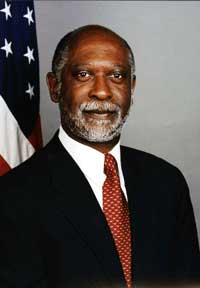 In 2002, Ambassador James Irvin Gadsden, career diplomat, and educator, was appointed by President George W. Bush to serve as ambassador to Iceland. Gadsden was born on March 12, 1948 in Charleston, South Carolina, to James who worked as a janitor and Hazel Gaines Gadsden who was a housewife and part-time domestic servant.

Gadsden attended racially segregated Charleston schools. From 1962 to 1964, he was a standout student at Charles A. Brown High School, where teachers, including future South Carolina Congressman James Clyburn, provided their students with the best education their resources would allow. Gadsden became interested in world studies under Clyburn. Encouraged by Principal Nathaniel Manigault, who recognized his academic talents, Gadsden completed his secondary education in Elizabeth Irwin High School in New York City, New York through an exchange program administered by The American Friends Service Committee (the Quakers). This program eventually led to Gadsden enrolling in Harvard University in 1966 and graduating four years later with a Bachelor’s degree in economics.

While at Harvard Gadsden received his first international exposure by briefly participating in a social outreach program in Peru.  This exposure let to interest in working abroad.  To that end he took an M.A. in Chinese studies from Stanford University (California) in 1972.

Gadsden’s diplomatic career began soon after graduation from Stanford when he joined the U.S. State Department as a foreign affairs officer.  His initial assignment was at Taiwan, first as a Political Officer (1972-74), then as a Market Research Officer (1974-76) during a critical period in U.S.-China relations. In the latter position, Gadsden became recognized as one of the U.S.’s top diplomats on capitalist expansion in mainland China.

In 1977, Gadsden became one of the few blacks assigned to a diplomatic mission on European soil, when he was sent to the U.S. Embassy in Hungary (1977-1981). Building on this experience and continuing through various appointments up to 2005, Gadsden became an expert in encouraging the consolidation of multiple European economies into a single market system that could stabilize the continent and unify its various political economies. Eventually the European Union came from the efforts of Gadsden and other diplomatic leaders.

In addition to serving in Hungary, Gadsden was also posted in Paris, France where he served as Deputy Assistant Secretary on NATO expansion (1997-2001) and Special Negotiator for Agricultural Biotechnology (2001-2002).

His extensive European experience led President George W. Bush to nominate him to serve as ambassador to Iceland in 2002. After U.S. Senate confirmation he presented his credentials to the government at Reykjavik.  While there he encouraged the government to fully integrate into the European Union.  He also represented the U.S. in trade agreements regarding fisheries, tourism, and banking.

When his ambassadorial appointment ended in 2005, Gadsden returned to the United States and became a member of the faculty at the National War College in Washington, D.C. He also continued to urge the State Department to increase its racial and gender diversity both before and after his retirement in 2007. At present James Gadsden is senior counselor for international affairs at the Woodrow Wilson National Fellowship Foundation at Princeton University (New Jersey), and enjoys family life with wife Sally Freeman Gadsden and his two children.