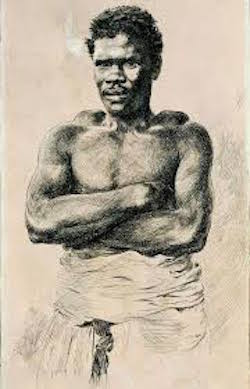 Thomas Fuller, often called “the Virginia Calculator,” was born in 1710, somewhere between the “Slave Coast” of West Africa (present-day Liberia) and the Kingdom of Dahomey (modern-day Benin). When the pre-colonial scramble for slaves replaced the earlier trade in gold, Fuller was snatched from his native land, sold as a slave, and brought to Colonial America in 1724, at age 14. Although considered “illiterate” because he could not read and write in English, he consistently demonstrated an unusual talent for solving complex math problems in his head. Northern Virginia planters, Presley and Elizabeth Cox, both of whom were also “illiterate,” quickly recognized his surprising abilities and put them to use in every phase of the management of their 232-acre plantation farm, about four miles from Alexandria, Virginia.

Working as a field slave for most of his adult life, it was generally believed that Fuller must have taught himself how to calculate early in life probably as a child in West Africa. In an environment where slaves were forbidden to learn to read and write, he explained his skill as coming from experimental applications around the farm such as counting the hairs in a cow’s tail or counting grains in bushels of wheat or flax seed. Allegedly, he also figured out a new way of multiplying how far apart objects were, wading into complex astronomy-related computations, now carried out by computer. Not surprisingly his owners refused numerous offers to purchase Fuller because they had come to depend on his amazing abilities to measure things with his mind, alone.

In 1780, when Fuller was 70 years old, a Pennsylvania businessman and a couple of associates, on hearing of his extraordinary genius, traveled to Alexandria to meet him. Out of curiosity, they asked a few questions. Two were noteworthy:  (1) how many seconds were in a year and a half? And, (2) how many seconds had a man lived who is 70 years, 17 days and 12 hours old?  When he correctly answered 47,304,000 and 2,210,500,800, respectively, in less than two minutes each time, one of the men objected, citing his own calculations were much smaller. Fuller quickly responded, “(Stop), Massa, you forget de leap year.” When the observer adjusted for the extra day every four years, they grudgingly accepted Fuller’s answer. Their observations of Fuller’s computational abilities were later submitted to the Abolitionist Society of Pennsylvania.

Fuller died on the Cox farm near Alexandria, Virginia in 1790. He was 80 years old. The Columbian Centinel, a Boston, Massachusetts newspaper noted in its obituary of Fuller: “Thus died ‘Negro Tom,’ this self-taught arithmetician, this untutored Scholar! — Had his opportunities of improvement been equal to those of thousands of his fellow-men, neither the Royal Society of London, the Academy of Science at Paris, nor even Newton himself, need have been ashamed to acknowledge him a Brother in Science.”