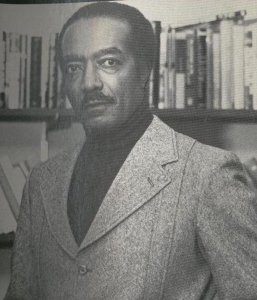 Hoyt W. Fuller, editor and writer, was born in Atlanta, Georgia, in 1923. After an illness caused his mother, Lillie Beatrice Ellafair Thomas, to become an invalid and after the death of his father, Thomas Fuller, in 1927, Fuller went to live with his aunt in Detroit, Michigan.  As a child, Fuller often returned to Atlanta to visit his grandmother, who encouraged him to explore black culture.

Fuller attended Wayne State University, graduating in 1950 with a BA in literature and journalism.  Fred Williams, a local amateur historian of Detroit’s black community, became Fuller’s mentor while he attended Wayne State.  Aside from giving Fuller readings about Africa and African Americans, Williams also brought Fuller along on his research trips to interview older members of the black community.  After graduation, Fuller pursued a career in journalism.  He worked at the Detroit Tribune (1949-1951), the Michigan Chronicle (1951-1954), and Ebony magazine (1954-1957).

Fuller became frustrated with the disconnect between Ebony’s content and the struggle for black freedom, so he quit his position as associate editor in 1957.  In his autobiographical work Journey to Africa (1971), Fuller describes his inability to find employment after leaving Ebony and his anger at the racially oppressive culture of America.  As a result, Fuller moved to Europe, living for three years (1957 to 1960) in France and Spain.  While in Spain, he wrote about West Africa for the Amsterdam Haagse Post.  Fuller spent three months in Algiers and Guinea, an experience that inspired him to write Journey to Africa.

Fuller’s experiences in Africa gave him a new sense of purpose and led him to return to the United States in 1960.  No longer concerned with reforming white American racial beliefs, Fuller focused his attention on black America.  He believed that African and African American culture would inspire black Americans to take action against racial oppression and contribute to more confident expressions of their own identity.  New York’s Collier’s Encyclopedia hired Fuller as associate editor in 1960.  In 1961, he became editor of Negro Digest, which became the Black World in 1970.  Negro Digest/Black World was devoted to black culture and arts and it became an important venue for many Black Arts Movement writers. When Black World was discontinued in 1975, Fuller moved to Atlanta and founded the journal First World (1977-1980).

Fuller worked at several universities, including Cornell and Northwestern.  He visited Africa again in 1965-1966 as a John Hay Whitney Opportunity Fellow. He also helped organize several Pan-African festivals and formed the Chicago Organization of Black American Culture, a writers’ group.  In 1981, Fuller died of a heart attack in Atlanta.