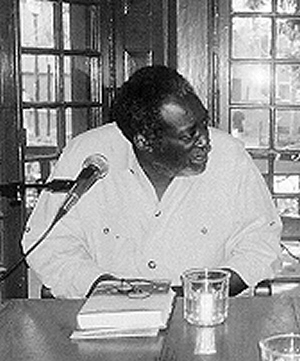 Charles Fuller was born on March 5, 1939 to parents Charles H. Sr. and Lillian Anderson Fuller of Philadelphia, Pennsylvania.  Fuller was the oldest of three children, but would see his parents welcome some twenty foster children into their home over the years.  Fuller attended Philadelphia’s Roman Catholic High School and graduated in 1956.  During his high school years, Fuller spent countless hours in the school library, and competed with a friend, Larry Neal, to become the first to read every book in the school’s collection.  This experience helped spawn Fuller’s dream of becoming a writer.

After graduation from high school, Fuller attended Villanova University in Pennsylvania between 1956 and 1958.  He then enlisted in the U. S. Army and spent the next four years stationed in Japan and Korea.  Fuller returned to civilian life in 1962 and in August of that year he married Miriam A. Nesbitt.

Charles Fuller began his writing career in Philadelphia during the 1960s, writing mostly poetry, short stories, and essays in his spare time while working various jobs throughout Philadelphia.  In 1965, Fuller decided to continue his education and enrolled in La Salle College (now La Salle University) which he attended until 1968.  During his time at La Salle, Fuller began writing short plays for a theatre group in Philadelphia that became the Afro-American Theatre of Philadelphia.  He helped found this theatre, and served as co-director until he moved to New York in 1970. Fuller’s first critical acclaim as a playwright came with the production of his play, The Village: A Party in 1968.  The Village was first produced by Princeton’s McCarter Theatre, and later it ran off-Broadway in New York where it was re-titled The Perfect Party.

It was on the heels of this success that Fuller decided to move to New York and devote
himself to writing full-time. During the 1970s, he wrote many plays that were produced off-Broadway.  He was supported in New York by a number of prestigious grants which included a Rockefeller Foundation fellowship in 1975, a National Endowment for the Arts Fellowship in 1976, and a Guggenheim Fellowship in 1977-1978.  In 1976, Fuller penned the first of his three most famous plays, The Brownsville Raid, a play based on true events which occurred near an Army base in Texas in 1906.  The second of his most successful plays, Zooman and the Sign was first produced in 1980.  Fuller won two Obie Awards (an award given for off-Broadway productions), in 1980 for Zooman.

In 1981, Fuller suffered a great loss when his childhood friend, Larry Neal, who also became a playwright, died of a heart attack.  Fuller decided to honor his friend by writing what became his most celebrated work, A Soldier’s Play.  This play ran off-Broadway for more than a year and earned the 1982 Pulitzer Prize for Drama. Charles Fuller became the second African American to win the Pulitzer (the first being Charles Gordone in 1970).  A Soldier’s Play also won the 1982 New York Drama Critic’s Award for Best American Play, as well as the Edgar Allen Poe Award for Best Mystery.  Fuller was also rewarded for his effort with a movie contract from Columbia Pictures.  He wrote the screenplay himself, and changed the name to A Soldier’s Story.  The film was released in 1984 and received two Academy Award (Oscar) nominations in 1985.

Since his success with A Soldier’s Story, Fuller has continued to write both for the theater and for film.  His screenplays have appeared on PBS, CBS, and TNT, and include an adaptation of Zooman and the Sign which was produced by the Showtime Network in 1985.  Fuller continues to live and work in New York City.