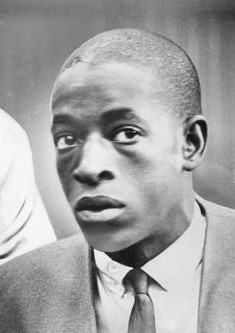 Marquette Frye, whose arrest sparked the Watts Riots in 1965, was born in Oklahoma but grew up in rural Hanna, Wyoming.  The family moved to Los Angeles, California in 1957, when Marquette was 13.  By the age of 16, Marquette was struggling to adjust to the ghetto and dropped out of high school.  He had already been arrested for gang involvement and had a difficult time holding a job.

Then on August 11, 1965, Marquette was driving his brother Ronald home on a hot afternoon after having a couple of beers.  They were pulled over just outside of Watts by CHP officer Lee Minikus.  During a field sobriety test, Marquette stumbled while walking the curb.  During this time, Ronald had walked the two blocks to the Frye home, and returned with their mother.

When they returned, a crowd of between 250 and 300 onlookers had arrived as well.  Marquette’s mother scolded him for his drunken driving, and Marquette, who had been cooperative, began to resist arrest.  A rumor spread through the crowd that Frye’s mother and possibly his pregnant girlfriend had been assaulted by the police.  The ghetto conditions of Watts, the strained relationship between the police and the African American community, and the hot weather combined into a powder keg.  At the end of five days of riots 34 people were dead and damage in excess of $40 million had destroyed the local community.

Marquette was haunted by the riots.  He was asked to speak at civil rights rallies.  However, he was unable to hold onto a job and in an effort to escape from his ties to the riots he attempted to use his mother’s maiden name for a time.  He was under police and Federal authorities’ surveillance, and was arrested for a variety of crimes.  He had two children, and became severely depressed after his 18 month old son passed away in 1970 with heart and kidney problems.  Marquette remained part of the community and warned children of the dangers of drinking, drugs, and gangs.  He died from pneumonia on Christmas Eve 1986 at the age of 42.