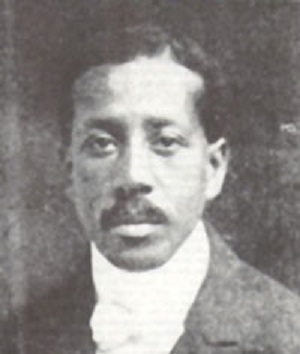 Composer, performer, musical critic/essayist, advocate, and teacher H. Lawrence Freeman was born in Cleveland, Ohio in 1869 to Lemuel Freeman and Agnes Sims-Freeman.  Initially self-taught, Freeman’s musical abilities were apparent at a young age. At 12, he started and performed in a boy’s vocal quartet.  He also worked as a church organist.  At 18, he was composing music.  In 1891, when he was 22 years old, Freeman had migrated west and organized the Freeman Grand Opera Company of Denver, Colorado.  The company would perform his first operatic works, Epthalia and The Martyr, at Denver’s Deutsches Theater in 1891 and 1893, respectively.

In 1893 at age 24, Freeman began formal music instruction with Johann Beck, the conductor of the Cleveland Symphony Orchestra, who compared Freeman’s musical style to that of the great German composer Wilhelm Richard Wagner. Despite the comparison, Freeman could find work only in so-called “race” music.  Between 1895 and 1899, he toured with Ernest Hogan’s Rufus Rastus Company and composed some of the music for Hogan’s blackface musical comedies.

At age 30, Freeman married actress and singer Charlotte (Carlotta) Louise Thomas, the daughter of a prominent black family from Charleston, South Carolina. The couple had one child, a son named Valdo Lawrence Freeman, born in January of 1900.  That same year, Johann Beck of the Cleveland Symphony Orchestra conducted excerpts from three of Freeman’s operas, a symphonic debut that garnered Freeman a great deal of media attention.

Freeman held a variety of positions during his lifetime that enabled him to promote the cause of African American musical performance and production.  From 1902 to 1904, he directed the music program at Wilberforce University.  In 1906 both Harry and Carlotta worked at the newly-formed Pekin Theatre in Chicago, the first theatre of its kind to be entirely run and performed by African Americans.  In 1908 Freeman moved his family to New York City and the following year he became the musical director for the Cole-Johnson Brothers Company and then musical director of the John Larkins Musical Comedy Company.  In 1912 he founded and conducted the 75 member Negro Choral Society.  In 1920 the Freemans founded both the Negro Grand Opera Company and the Salem School of Music in Harlem, later renamed the Freeman School of Music.  The Freeman’s brownstone also served as a gathering place during the Harlem Renaissance for such notables as Marion Anderson and Lena Horne.  During this time Freeman also served as a musical critic/essayist for the New Amsterdam News.

Freeman performed at Carnegie Hall twice during his lifetime, once in 1930 and again in 1947.  He also composed and directed a musical event at the 1934 Chicago World’s Fair that showcased the African American experience.  In 1930 he received the Harmon Award for significant achievement by an African American in the field of arts and letters.

In the late 1940s, Freeman sought to found yet another organization that would promote black composers and singers, the Aframerican Opera Foundation, but his efforts were cut shot by his death on March 24, 1954, at age 85.  His wife, Carlotta, died just three months later, on June 11, 1954.