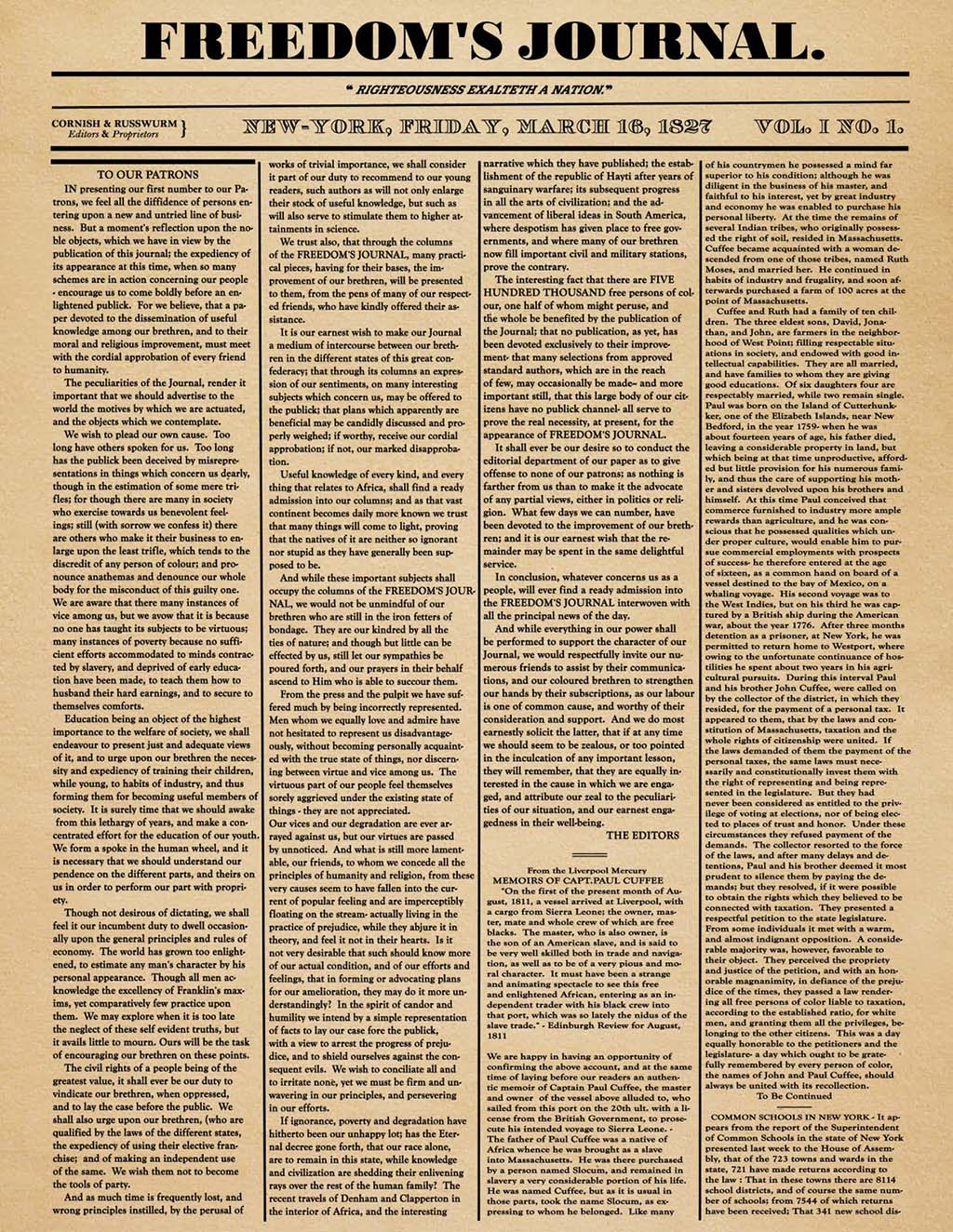 Freedom’s Journal, established the same year that slavery was abolished in New York, was the first African American-owned and operated newspaper in the United States. In its early years, it distributed more than 800 copies throughout 11 states and the District of Columbia. It reached as far as Canada, Haïti, and the United Kingdom for an annual subscription cost of $3.00. The newspaper was founded on March 16, 1827, at 5 Varick Street in Lower Manhattan, New York, by Jamaican-born John Brown Russwurm, Bowdoin College’s first African American graduate and only the third Black person to graduate from an American college. Cofounder Samuel Eli Cornish, born in Sussex County, Delaware, and a graduate of the Free African School in Philadelphia, Pennsylvania, also founded Shiloh Presbyterian Church, the first Black Presbyterian Church in Manhattan, in 1822.

Freedom’s Journal was entertaining and informative. Its pages included articles regarding improving education, health, and living conditions for the over 300,000 free Black women and men living in the northern states of the U.S. The paper had a classified section that included a listing of schools, jobs, and affordable places to live. There was also a social section that printed information about birth, death, and wedding announcements. The paper’s primary focus, however, remained the campaign to end slavery in the South and fight racial discrimination in the North.

In September 1827, Cornish resigned as co-editor of Freedom’s Journal because of disputes with cofounder Russwurm, leaving him the sole editor. Russwurm shifted the focus of the paper, which now began promoting the idea of emigration of Black Americans to Africa. Russwurm embraced the controversial American Colonization Society, a predominately white organization that worked to return free blacks to its West African colony of Liberia, a stand increasingly opposed by many Northern African Americans. By this time, however, many financial supporters of the newspaper halted their involvement, and on March 28, 1829, Freedom’s Journal ceased publication after releasing only 103 issues. In April 1829, Samuel Cornish revived the newspaper, changing its name to The Rights of All. However, that publication survived only for eight months.

In 1829, John Brown Russwurm earned a Master of Arts degree from Bowdoin and emigrated to Liberia by November of that year. In 1836, he became Governor of Maryland County in Liberia and remained in that office until he died on June 9, 1851, at the age of 52. Samuel Eli Cornish died in Brooklyn, New York, on November 6, 1858. He was 63.

Despite its short life span, Freedom’s Journal established the vital role of Black newspapers in African American life and politics. It also created the model of journalism that numerous Black journals and journalists would follow in the United States and around the world for the next two centuries.

“Freedom’s Journal,”https://www.pbs.org/blackpress/news_bios/newbios/nwsppr/freedom/freedom.html#:~:text=Founded%20on%20March%2016%2C%201827,abolished%20in%20New%20York%20State; “History of African-American Newspapers,” http://www2.vcdh.virginia.edu/afam/reflector/newspaper.html; “Timeline: Milestones of the Black Press in the U.S. Highlights from the history of the Black press show its enduring importance,” https://niemanreports.org/articles/timeline-of-the-black-press/.