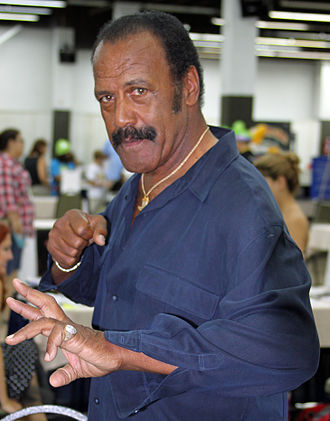 Fred “The Hammer” Williamson is an African American actor-director-writer-producer who built and sustained a long career as a black action hero from the “blaxploitation” era of the 1970s to well into the twenty-first century. Born on March 5, 1938 in Gary, Indiana to parents Frank and Lydia Williamson, he was educated in local public schools and earned a track scholarship to Northwestern University, where he studied architecture.

Persuaded by Northwestern football coach Ara Parseghian to switch from track to football, Williamson’s prowess on the field led to an eight-year career as a pro defensive back known as “the Hammer.” Beginning in 1960 when he was drafted by the Pittsburgh Steelers, his teams also included the Oakland Raiders and finally the Kansas City Chiefs. Although Kansas City lost to Green Bay in the first NFL Championship now known as Super Bowl I, in January 1967, his Super Bowl ring is still part of his signature appearance.

After retiring from pro football in 1968, Williamson moved to Los Angeles, California to become an actor. The timing was right: it was a heady time for black actors; instead of auditioning for demeaning roles, they could compete for parts more representative of the advances in social, educational, and professional status currently being achieved by African Americans. In addition to their new political clout resulting from record voter registration numbers, blacks were also voting at the box office. Black male stars like Jim Brown, Billy Dee Williams, Richard Roundtree, and Williamson now brought strong audience appeal to a new genre: the black action film, often called “blaxsploitation” by critics. In most cases “blaxploitation” films did not advance the art of cinema, but they filled a perceived hunger at the time among black audiences who longed to see “themselves” on the silver screen.

Throughout the early 1970s, Williamson’s films converted the familiar Hollywood action movies from white to black: The James Bond spy thriller became That Man Bolt (1973), while the James Cagney/Edward G. Robinson gangster film became Black Caesar. Fans who had watched him play football on TV for nearly a decade before successfully transitioning to a Hollywood career could easily ascribe to Williamson an authentic aura of toughness, skill, and heroism.

In 1974 Williamson formed his own film company, Po’ Boy Productions, and became an independent filmmaker. Some of the two dozen films he directed include Mean Johnny Barrows (1975), One Down, Two to Go (1982), and On the Edge (2002). In 2018, The Last Hit Man starring Williamson and Franco Nero, was in pre-production. Nearly 50 years after his movie debut, he remained a relevant if not major force in the film industry.

Fred Williamson and other stars from the 1970s blaxploitation era must be credited with validating the impact of African Americans at the box office. Film development: scriptwriting, casting, planning, and marketing, would never be the same following that historic demonstration. Williamson lives in Los Angeles and continues to be involved in the film industry.