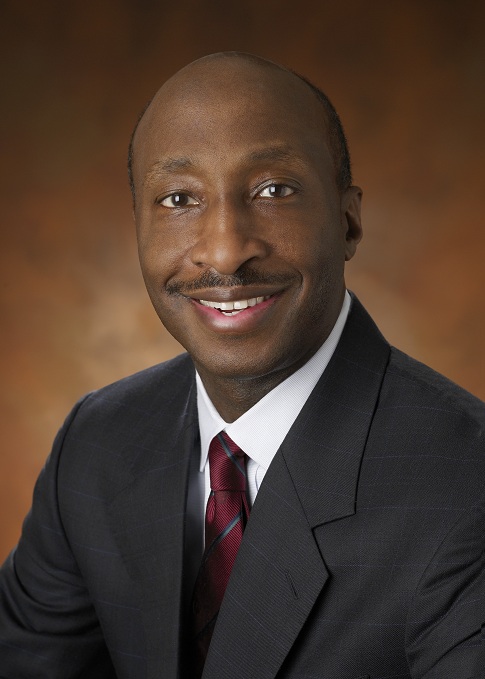 Kenneth C. Frazier is the first African American President of Merck & Co., a major pharmaceutical corporation. Frazier was elected by the Board of Directors to be the next CEO on May 1, 2010, and assumed the post on January 1, 2011.

Kenneth Frazier was born in Philadelphia, Pennsylvania to Otis and Clara Frazier on December 17, 1954. Along with his three siblings, Frazier was raised by his father after his mother passed when he was 12 years old. His father, Otis, migrated to Pennsylvania at age 14. With the equivalent of a third grade education, Otis Frazier worked most of his life as a custodian for the U.S. Parcel Service.

Kenneth Frazier graduated from high school at age 15.  He hoped to enter the United States Military Academy at West Point. Denied entry due to his young age, he instead entered the University of Pennsylvania where he graduated in 1975. Immediately afterward he enrolled in Harvard Law School where he graduated with his Juris Doctorate degree in 1978.

Frazier’s professional career began at Drinker Biddle & Reath, a prominent law firm in Philadelphia where he became one of its few African American partners.  Frazier worked at the firm from 1978 to 1992.  While at Drinker he took part in work for one of the firm’s major clients, Merck and Company, the second largest pharmaceutical corporation in the United States. In 1992, he joined the pharmaceutical company as one of its corporate attorneys. Seven years later he led the firm’s defense against claims that its anti-inflammatory drug Vioxx caused heart attacks and strokes. At the time Merck’s liability was estimated to be $50 billion dollars.  Frazier chose to fight the major cases in court rather than settle them quickly.  Eventually all cases were settled in 2007 for $4.85 billion.

Frazier held a number of positions at Merck including Vice President and Deputy General Counsel, Vice President of Public Affairs, and finally President of Global Human Health, the post he held when he was selected CEO of the firm. Frazier attributes his interest in developing new drugs to improve the lives of people in developing nations to the death of his father from Alzheimer’s disease.

Although Frazier has spent much of his professional career as a legal counsel for law firms and corporations, in 1991 the Death Penalty Representation Project asked him to serve as a pro bono litigator for James “Bo” Cochran, an African American who had been on death row since 1976 awaiting execution for the murder of grocery store assistant manager. Thanks to Frazier’s representation, in 1995, the U.S. Court of Appeals overturned Cochran’s conviction.  He was tried again in 1997.  Frazier also represented him in the new trial where Cochran was found not guilty.

On November 11, 2011, Frazer was placed in the national spotlight when he as a Penn State Board of Trustees member, was selected chair of the commission established to investigate the child sex abuse scandal involving former assistant football coach Jerry Sandusky.  Among the commission’s recommendations was the firing of head football coach Joe Paterno.

On August 14, 2017, Frazier resigned from President Donald Trump’s American Manufacturing Council over the President’s public remarks in the aftermath of the “Unite the Right” rally the previous weekend in Charlottesville, Virginia sponsored by neo-Nazis, the Ku Klux Klan, and other white supremacist groups.  His resignation prompted a number of other CEOs to resign from the Council over the President’s remarks and eventually forced the White House to disband the Council.

Kenneth Frazier currently resides in his hometown of Philadelphia, Pennsylvania with his wife Andrea. Together, they have two children, their son James and daughter Lauren.