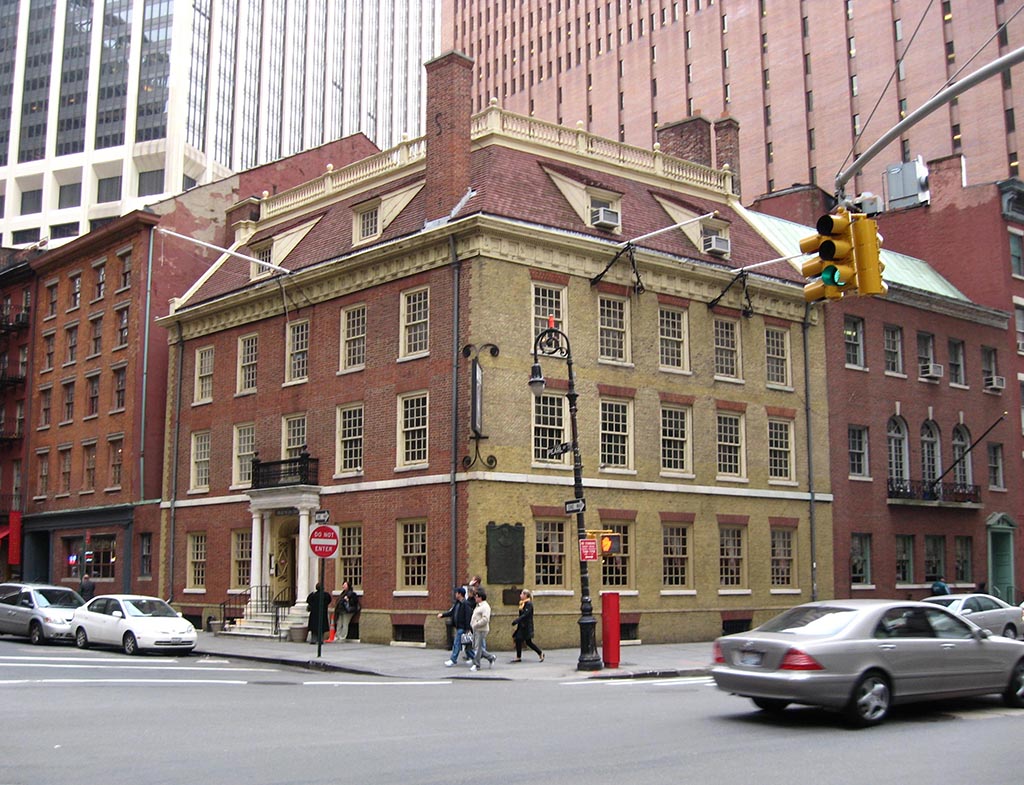 Fraunces Tavern at 54 Pearl Street, New York City, New York, played an important role during the American Revolution.  Originally built in 1719 as a home to a New York colonial leader, it was sold at an auction to Samuel Fraunces (1722-95), a merchant of French-West Indian ancestry in 1762.  Fraunces converted the home into the “Queen’s Head Tavern.”   Fraunces was popular with New York City’s elite and many patronized his tavern.  In 1768, these patrons established the first New York Chamber of Commerce at Fraunces Tavern.

In 1765, Fraunces Tavern’s prominence in the American Revolution grew after a British captain tried to unload tea into New York City.  The captain was later forced to issue a public apology at Fraunces Tavern.  By 1774, the Sons of Liberty and other organizations often used the tavern to mobilize support for the Revolution.  In 1775, when the patriots commandeered the British cannons at Manhattan and fired upon some British soldiers, the British returned fire and sent a cannonball through the tavern’s roof.  During the Revolutionary War Samuel Fraunces passed on information the American patriots that exposed General Benedict Arnold as a traitor. In 1783 the Book of Negroes was compiled at the tavern. The book listed the more than 3,000 black loyalists who would be evacuated with the British Army to Nova Scotia.

General George Washington frequented Fraunces Tavern.  After the British evacuated New York City, the tavern hosted Washington and the other officers’ victory celebration. Washington also gave his famous 1783 farewell address to his officers at the Tavern before leaving for his home in Mount Vernon, Virginia.  In 1789, Washington returned to Fraunces Tavern to celebrate his inauguration at New York’s Federal Hall as the first president of the United States.  Samuel Fraunces sold the tavern in 1785.  Four years later he became Washington’s Executive Steward.

Fraunces Tavern’s patriotic significance continued when it provided offices to the Continental Congress after the War.  Once the Constitution was created, it housed several newly created government agencies including the departments of Foreign Affairs (later called the US State Department), Treasury, and War.

After Philadelphia, Pennsylvania became the temporary capital for the country, Fraunces Tavern’s importance faded.  Beginning in 1832, a series of devastating fires greatly altered the Tavern’s appearance.  In 1883, The Sons of the Revolution was founded at the Tavern.  Seventeen years later, however, the owner threatened to demolish it for a parking lot.  After a lengthy battle between the New York City and the owner, The Sons of the Revolution bought the Tavern in 1904.  They restored the building and converted it into a Museum in 1907.  In 1965, Fraunces Tavern was designated a New York City Landmark.  By 1977, Fraunces Tavern was a Historic District on the National Register of Historic Places.