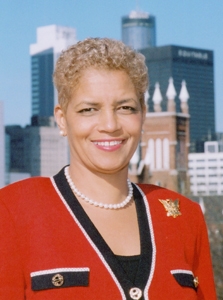 Shirley Clarke Franklin became Atlanta, Georgia’s first African American female mayor in 2001, as well as the first woman to be a mayor of a major southern city.  Clarke was born in Philadelphia, Pennsylvania on May 10, 1945 to parents Eugene Haywood Clarke and Ruth Lyons Clarke.  She attended public schools in Philadelphia. In 1963 at the age of 18, Clarke participated in the March on Washington where she saw and was inspired by Martin Luther King and Coretta Scott King.

Clarke graduated from Howard University with a Bachelor of Arts degree in Sociology in 1968.  She then attended the University of Pennsylvania and earned her master’s degree in 1969.  Clarke married David McCoy Franklin in 1972.  The couple has three adult sons.

After teaching political science at Talladega College in Alabama for nearly a decade, in 1978 Shirley Clarke Franklin was appointed by Mayor Maynard Jackson to the post of Commissioner of Cultural Affairs for the City of Atlanta.  When Jackson was succeeded by Mayor Andrew Young, she was named Chief Administrative Officer and City Manager.  Franklin gained notoriety as one of the officials who helped bring the Olympic Games to Atlanta in 1992.

Nine years later, in 2001, Franklin succeeded two term Mayor Bill Campbell. She capitalized on what many city residents felt was City Hall’s inattentiveness to neighborhood concerns and the large deficit in the city’s budget when she challenged Campbell’s protégé, Rob Pitts.  Franklin also emphasized social welfare issues as she attracted support from the city’s women voters.  Franklin won a surprise victory, gaining just over 50% of the vote in a hard fought campaign.

After the election Mayor Franklin focused primarily on paying off the enormous city debt.  In order to fight the deficit, she cut city spending beginning with her own salary and that of her staff.  Despite reducing the deficit she improved city services and hired more police and firefighters.  Time Magazine named Franklin one of the five best big-city mayors in 2005.

Later in 2005, Franklin ran for reelection and with support from the business community, and won nearly 90% of the vote.  During her second term she focused on improving the city’s educational system.  She also led the effort to have the Martin Luther King Papers housed at Morehouse College rather than sold at auction. Budget problems remained, however, and in 2008, when the Atlanta City Council refused to enact tax increases, Franklin announced more cuts and layoffs.

Franklin also generated criticism for prohibiting panhandling and public feeding of the homeless.  Coupled with pro-downtown business policies, she was accused of forcing the poor out of Atlanta.  Franklin, who was prohibited from running for reelection because of term limits, was succeed by former Georgia State Senator Kasim Reed who was elected in December 2009.