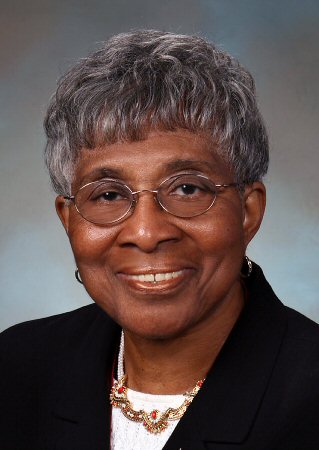 Rosa Franklin is the first black woman elected to the Washington State Senate, serving the 29th Legislative District in the Tacoma area. She is also a registered nurse who retired after 42 years in health care.

Franklin was born Rosa Guidrion on April 6, 1927, in Moncks Corner, South Carolina.  The youngest of 12 children, she went to live with her aunt and uncle in Georgetown, South Carolina when she was seven.  After she graduated high school, she studied nursing at the Good Samaritan Waverly Hospital School of Nursing in Columbia, South Carolina.  She then worked at a state hospital in New Jersey, and at Brooklyn Jewish Hospital in New York.

Franklin lived in Tacoma, Washington; Colorado, and Germany, before settling again in Tacoma when her husband, James Franklin, whom she married in 1950, was re-assigned to Fort Lewis in 1967.  She earned a bachelor’s degree in biology and English from the University of Puget Sound in 1968, and a master’s degree in social sciences and human relations from Pacific Lutheran University in 1974. Her nursing career continued at Madigan Army Hospital, the Alice Hamilton Women’s Clinic, the Hilltop Children’s Clinic, Upjohn Health Care Services, and through independent contracting.

Franklin first ran for elected office when she sought a position on the Tacoma City Council in 1972.  She lost, but stayed involved in party politics as a Precinct Committee Officer for the Democratic Party and as a member of the League of Women Voters.  She was a delegate to the Democratic National Convention in 1976, 1988, and 2008.

Franklin was first elected to the Washington State Legislature in 1990 as Representative No. 1 from the 29th District, and she won re-election in November 1992.  Then, just two months later, the State Senator for the 29th District died.  Franklin was appointed to replace him.  She won election to the seat the next year, and then ran unchallenged in her three successive re-elections.

Her first year in the Senate, Franklin sponsored the bill that became the Washington Housing Policy Act, which establishes affordable housing and anti-discrimination policy.  In 2004 she sponsored legislation that removed redundant requirements for nursing credentials.  Her interest in the bill came from her experience at the University of Puget Sound, where a nursing degree would have required her to re-take classes.  In 2008 Franklin sponsored a bill that lets voters in local jurisdictions approve public financing of election campaigns.  She has served twice as President Pro Tempore, once as Majority Whip, and once as Democratic Whip.

Franklin’s many honors include an honorary doctorate from the University of Puget Sound, a Lifetime Achievement Award of the Washington State Democratic Party, and induction into the Washington State Nurses’ Association Hall of Fame. Rosa Franklin has three children with her husband James.  They live in Tacoma.