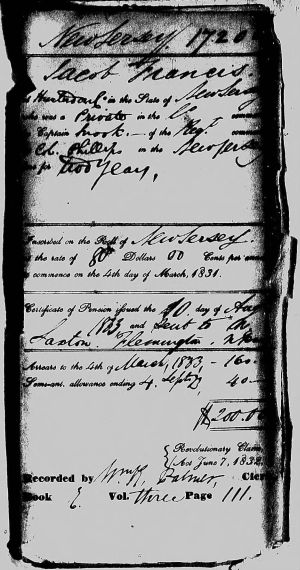 Jacob Francis, Revolutionary War veteran, was born on January 15, 1754 in Amwell, New Jersey. His mother was African American and his father’s race was unknown. What is known of Francis’ childhood is found in the personal testimony included on his military pension application.

It is unknown if Francis was born free or into slavery, but as a child he was bound out to no fewer than five men before coming of age. His first indenture was with Henry Wambaugh, who then sold Francis’ time to Michael Hatt, who in turn sold the boy’s time to farmer Minner Gulick (1731-1804). When Francis was 13, Gulick sold his time to Joseph Saxton who, in May 1768, took the young man as his servant to New York, Long Island and then to the Island of St. John. In about November 1769, the two sailed to Salem, Massachusetts where Saxton sold the fifteen-year-old’s time to Salem resident Benjamin Deacon, with whom Francis remained until he turned 21 in January 1775.

Within a matter of weeks, the Revolutionary War erupted nearby. By October, Jacob Francis had enlisted as a private in the 8th Massachusetts Regiment, which became the 16th Continental Regiment under the command of Colonel Paul D. Sergeant. Jacob took the surname of one of his previous custodians upon enlistment, but later changed it after learning his surname from his mother.

Francis’ regiment helped drive the British out of Boston. They then sailed to New York where they participated in the Battle of Long Island on August 27, 1776. His regiment then retreated to Peekskill, New York, then to Morristown, New Jersey, and finally into Trenton, New Jersey in time for the Battles of Trenton on December 26, 1776 and January 2, 1777. Francis left his Army unit in 1777 at Trenton to return to his childhood home, where his mother was in ill health. Francis did not return to his unit to muster out or receive his back pay. Instead he enrolled in the New Jersey militia, serving until 1781.

In September 1789, Jacob Francis married Mary, an enslaved woman from the household of Nathaniel Hunt, and soon thereafter purchased his wife’s freedom. Jacob and Mary settled in Flemington, New Jersey and had a large family, including sons John, Jacob, Isaac, and Abner H. Francis.

During its 1826 July 4th celebration, the city of Flemington honored its living Revolutionary War soldiers, including two African American veterans, Jacob Francis and Lewis English. By this time, Francis had still not collected the back pay owed to him by the U.S. government. Within a few years, however, Francis sought compensation under an 1832 Act of Congress, which expanded military pension benefits to include all those who had served at least two years in the Continental Army or State militias. After submitting his detailed service narrative, supported by the testimony of several character witnesses, his name was placed on the pension roll in 1833.