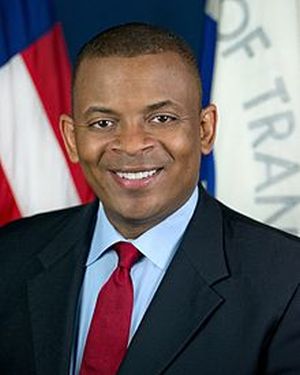 Anthony Foxx, the seventeenth United States Secretary of Transportation, was born April 30, 1971 in Charlotte, North Carolina, and raised by his mother, Laura Foxx, and grandparents James and Mary Foxx. He graduated from West Charlotte High School in 1989, and four years later received a Bachelor’s in history from Davidson College in Davidson, North Carolina.  Foxx was the first African American student body president at Davidson College. In 1996 Foxx earned a law degree from the New York University School of Law as a Root-Tilden Scholar, the most prestigious public service scholarship at the University.

After law school Foxx worked for a brief period at Smith, Helms, Mulliss & Moore, a Charlotte law firm.  He then clerked for Judge Nathaniel R. Jones of the Sixth Circuit Court of Appeals in Cincinnati, Ohio. From there Foxx worked as a trial attorney for the Civil Rights Division of the United States Department of Justice.  He also served as staff counsel to the United States House of Representatives Judiciary Committee.

Foxx entered politics in 2004 when he served as campaign manager for U.S. Congressman Mel Watt.  The following year Foxx ran successfully as the At-Large Councilman for the Charlotte City Council, and served two terms in this position, from 2005-2007 and 2007-2009.  As Councilman Foxx chaired the Transportation Committee, where he helped organize the most ambitious transportation bond package in the city’s history.  Foxx’s plan allowed Charlotte to take advantage of record-breaking low interest rates and construction prices, combined with the use of city surplus funds, to support an array of new projects without raising taxes.

During this period Foxx also chaired the Mecklenburg-Union Metropolitan Planning Organization, the agency which oversaw planning for the greater Charlotte Metropolitan Area. Some of the initiatives Foxx led created jobs in Charlotte’s inner city, while others, such as a single stream recycling program and programs to reduce greenhouse gas, were designed to protect the environment.

Based on this rare combination of achievement, more inner city jobs and environmental protection, 38 year-old Foxx ran for Mayor of Charlotte in 2009.  He won the contest and became the second black mayor (after Harvey Gantt) in the city’s history. Fox was also the first Democrat to hold the post since Gantt’s term ended in 1987.

While making Charlotte a new center for the energy industry, during his tenure as mayor Foxx oversaw the creation of 4,000 new jobs to combat the city’s 13% unemployment rate. He held town meetings for unemployed workers, reformed small business loan programs for further job creation, supervised the completion of the new runway at the Charlotte Douglas International Airport, and organized a meeting between Charlotte business leaders and White House officials to discuss new measures for spending to promote economic recovery. Foxx also started the Charlotte Streetcar Project, created a design-build-finance strategy to improve the outer belt loop of I-485, and extended the LYNX light rail system.

Foxx, a member of Sigma Pi Phi Fraternity, lives in Charlotte with his wife, Samara Ryder, and two children, Hillary and Zachary.  He commutes to Washington, D.C.