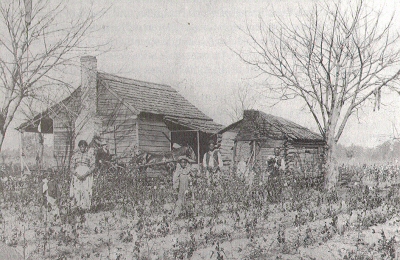 The phrase “forty acres and a mule” evokes the federal government’s failure to redistribute land after the Civil War and the economic hardship that African Americans suffered as a result.  As Northern armies moved through the South at the end of the war, blacks began cultivating land abandoned by whites.  Rumors developed that land would be seized from Confederates and given or sold to freedmen.  These rumors rested on solid foundations: abolitionists had discussed land redistribution at the beginning of the war, and in 1863 President Abraham Lincoln ordered 20,000 acres of land confiscated in South Carolina sold to freedmen in twenty-acre plots.  Secretary of the Treasury Salmon Chase expanded the offering to forty acres per family.

In January 1865, General William T. Sherman met with twenty African American leaders who told him that land ownership was the best way for blacks to secure and enjoy their newfound freedom.  On 16 January that year, Sherman issued Special Field Order No. 15.  The order reserved coastal land in Georgia and South Carolina for black settlement.  Each family would receive forty acres.  Later, Sherman agreed to loan the settlers army mules.  Six months after Sherman issued the order, 40,000 former slaves lived on 400,000 acres of this coastal land.  In March, Congress seemed to indicate plans for widespread land reform when it authorized the Freedmen’s Bureau to divide confiscated land into small plots for sale to blacks and loyal Southern whites.

Less than a year after Sherman’s order, President Andrew Johnson intervened and ordered that the vast majority of confiscated land be returned to its former owners.  This included most of land that the freedmen had settled.  The federal government dispossessed tens of thousands of black landholders.  In Georgia and South Carolina, some blacks fought back, driving away former owners with guns.  Federal troops sometimes evicted blacks by force.  In the end, only some 2,000 blacks retained land they had won and worked after the war.

Other provisions existed for blacks to acquire land, but they were ineffective.  Prices under the Southern Homestead Act (1866) were too high for former slaves with almost no capital.  The development of Black Codes and the use of year-long contracts to bind labor also made acquiring land nearly impossible.  The federal retreat from land redistribution was not only a disappointment that cultivated a sense of betrayal, it was also a missed opportunity for economic reform that might have allowed Southern blacks to consolidate and hold political gains made during the early years of Reconstruction.