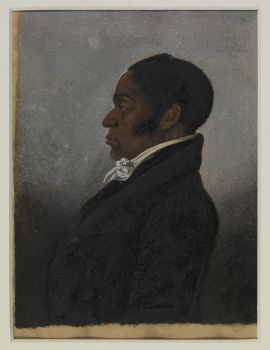 James Forten was born free on September 2, 1766 in Philadelphia, Pennsylvania. His parents were Thomas and Sarah Forten. He was also the grandson of slaves.  His formative years were spent in Philadelphia, and he attended Anthony Benezet’s Quaker school for African American children.  By the time he turned eight years old, he was working for Robert Bridges’s sail loft. This is where his father worked as well. The following year, his father was the victim of an unfortunate boating accident and died. This tragedy resulted in nine-year-old James having to take on additional work to support his family.

Over time, James Forten became interested in politics and avidly campaigned for and supported temperance, women’s suffrage, and equal rights for African Americans.  In 1800, he was the leader in organizing a petition that called for Congress to emancipate all slaves. Given the fact that this was a presidential election year, rumor had it that a few of the presidential candidates (among them Thomas Jefferson) were none too pleased with a black man advocating for the emancipation of slaves.  His activism was further recognized when he wrote and published a pamphlet denouncing the Pennsylvania legislature for prohibiting the immigration of freed black slaves from other states.

During his early teens, he worked as a powder boy during the Revolutionary War on the Royal Lewis sailing ship. After being captured by the British army, he was released and returned home to resume his previous job.  Pleased with his work and dedication, he was appointed to the foreman’s position in the loft.  By 1798, Bridges decided to retire and wanted Forten to remain in charge of the loft.  Eventually James Forten owned the business and employed almost forty workers.

In 1817, Forten joined with Richard Allen, the founder of the African Methodist Episcopal Church, to form the Convention of Color. Interestingly, the organization argued for the migration of free black slaves to Canada, but vehemently resisted any movement for a return to the African continent. Other prominent men who joined Forten and Allen were William Wells Brown, Samuel Eli Cornish, and Henry Highland Garnet.

James Forten died on March 4, 1842.  His early years had been devoted to providing for his widowed mother, his middle years towards acquiring a vast economic fortune and rectifying the brutal injustices that had been perpetrated upon his fellow African Americans, poor people, and women.