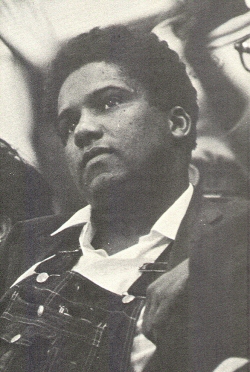 Civil rights leader and political activist James Forman was an instrumental leader in the Student Non-Violent Coordinating Committee (SNCC), sending demonstrators to the South for the Freedom Ride protests. Forman, who was born in Chicago, Illinois on October 4th, 1928, lived with his grandmother in Mississippi until the age of six when he returned to live with his mother and stepfather in Chicago. Forman used his stepfather’s surname Rufus until, as a teen, he met his real father Jackson Forman, a cabdriver.

He graduated with honors from high school and entered the Air Force, stationed in Okinawa, Japan during the Korean War. In 1952, he enrolled in the University of Southern California. During his second semester, Forman was a victim of brutality: accused of a robbery he did not commit, he was taken to a police station and beaten by two Los Angeles police officers. The incident caused Forman to have a mental breakdown, and he returned to Chicago. After his recovery he enrolled in Roosevelt University and received a bachelor’s of arts degree 1957.

In the late 1950s and early 1960s, Forman spent time working as a graduate student, journalist, and teacher. He wrote for the Chicago Defender newspaper, covering the desegregation crisis in Little Rock, Arkansas, in 1956-1957. That experience introduced him to the civil rights movement. In 1961, Forman participated in a SNCC Freedom Rides across the South and was arrested. After this incident, he went to work for SNCC full time, becoming its executive secretary in 1961, a position he held for five years. Older than the other members of SNCC, he provided a guiding hand to the group, organizing, expanding and handling the finances of the organization. Through Forman’s leadership, SNCC became a formidable civil rights organization.

Personally unhappy with the gradual approach to reform preferred by many contemporary civil rights leaders, Forman’s beliefs became increasingly militant. Yet in 1966, Forman was driven out of the SNCC, replaced by stronger militants Stokely Carmichael and H. Rap Brown.

In the late 1960s, Forman participated in the Black Economic Development Conference and founded the non-profit Unemployment and Poverty Action Committee. It was around this time that he developed his “Black Manifesto,” and in May 1969 he interrupted a service at New York City, New York’s Riverside Church to present his Manifesto, demanding $500 million in reparations from white churches for injustices to African-Americans.

Forman then returned to education, completing graduate work in African American Studies at Cornell University in 1980 and receiving a Ph.D. in 1982 from the Union of Experimental Colleges and Universities. In his later years, he wrote several books about politics and his personal experiences, and taught at American University in Washington, D.C. Forman died of colon cancer in 2005 in Washington, D.C.