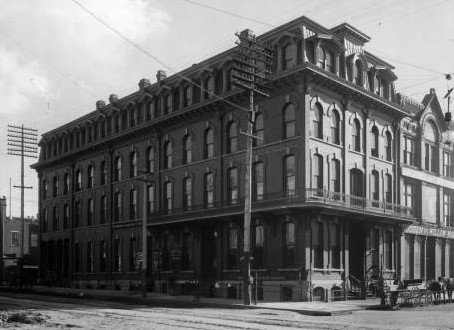 Born in 1822 to a Virginia slave and a white plantation owner, Barney L. Ford grew up in South Carolina where he learned to read and write from another servant. Ford escaped slavery at age twenty-six when his master hired him out to work on a Mississippi riverboat. He simply walked off the boat in Quincy, Illinois and fled to Chicago.

In Chicago Ford met and married his wife Julia A. Lyoni in 1849. The Fords and their two children, Lewis Napoleon and Sadie, lived at various times in Denver and Breckenridge, Colorado, Cheyenne, Wyoming, and San Francisco, California.  In each locale Ford built thriving enterprises that at some point suffered the vicissitudes of nature or the west’s boom-bust economy.

Denver’s famous Inter-Ocean Hotel and Ford’s Restaurant and Chop House in Breckenridge may be the best known of his ventures. Ford opened his elegant hotel in 1874, but faced bankruptcy after he opened another Inter-Ocean Hotel in Cheyenne, Wyoming.  A move to San Francisco exposed him to restaurants known as chop houses, and in 1882 Barney and Julia returned to Breckenridge where they opened Ford’s Restaurant and Chop House. There the family began construction on a five-room cottage that is now the Barney Ford Museum.

Ford’s reputation survived his 1902 death, and his stained glass image resides in Colorado’s House of Representatives in recognition of his efforts to end racial discrimination and gain civil rights for black people. He effectively opposed Colorado statehood on the grounds that black men were denied the ballot.  He joined other educated black men in the territory to establish adult education classes for black people in reading, writing, arithmetic, and the workings of democratic government.  He traveled to Washington, D.C. to lobby the U.S. Senate for the right to vote, and became the first black man in the state to serve on a U.S. grand jury.